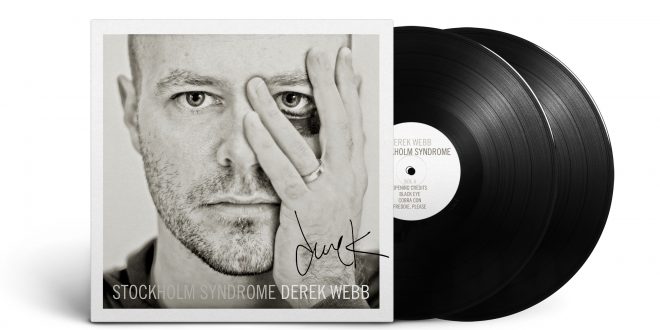 Derek Webb has sold millions of albums as a founding member of Texas-based folk/rock band Caedmon’s Call, and ruffled political & spiritual feathers as a solo artist. The 20 year music industry veteran is on tour right now in support of the 10th anniversary of his critically acclaimed fifth solo album Stockholm Syndrome. “I’m doing a limited tour of listening rooms, taming these electronic & urban sounds into radically intimate, acoustic reinterpretations. Get ready to hear Stockholm Syndrome like you’ve never heard it before.”“Stockholm Syndrome was the album that changed everything for me. it was the farthest I had ever ventured out from my singer/songwriter roots, the hardest I had ever pushed against typical content conventions, and the most creative I’d ever had to be in the marketing of an album (after it was censored by the record label). Webb will be at the Basement this Friday (11/22) and wants to give two tickets and a vinyl copy of Stockholm Syndrome to some lucky Nashville.com visitor! Just click here, tag a friend on our Facebook page to enter. Each person you tag counts as an additional entry. Good luck!
–Jerry Holthouse

Music editor for Nashville.com. Jerry Holthouse is a content writer, songwriter and a graphic designer. He owns and runs Holthouse Creative, a full service creative agency. He is an avid outdoorsman and a lover of everything music. You can contact him at JerryHolthouse@Nashville.com
Previous Matt Stell Celebrates First Number One “Prayed For You”
Next The Last Waltz Nashville: An All-Star Celebration of The Band’s Historic Farewell Concert