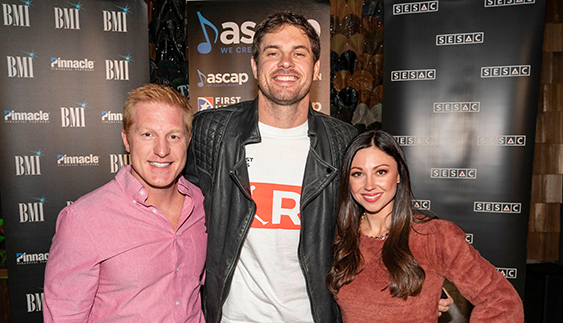 Matt Stell Celebrates First Number One “Prayed For You”

Breakthrough songwriter-artist Matt Stell celebrated his hit single “Prayed For You” with co-writers Ash Bowers and Allison Veltz Cruz, music publishers, family and friends at a party hosted by performing rights organizations ASCAP, BMI and SESAC at Nashville’s The Sutler on Nov. 19. To add to the festivities, all three writers were congratulated on earning their first #1 songs.

With a career poised to skyrocket, Stell continues to ride the success of his Gold-certified (and approaching Platinum) multi-week #1 hit “Prayed For You.” On the Billboard Country Airplay chart, “Prayed For You” is the only debut artist single to top the chart in 2019. In addition to holding #1 spot for two consecutive weeks on Billboard, Stell’s hit also topped the Country Aircheck/Mediabase Airplay chart, and to date has exceeded 125 million streams.

Stell just announced his first headline tour, MATT STELL EVERYWHERE BUT ON TOUR, kicking off in San Diego on January 24 and spanning the U.S. through March of 2020.

Music editor for Nashville.com. Jerry Holthouse is a content writer, songwriter and a graphic designer. He owns and runs Holthouse Creative, a full service creative agency. He is an avid outdoorsman and a lover of everything music. You can contact him at JerryHolthouse@Nashville.com
Previous Tanya Tucker Leads Country Grammy Nominations
Next WIN! Two Tickets To See Derek Webb Plus A Signed Vinyl Copy Of “Stockholm Syndrome”