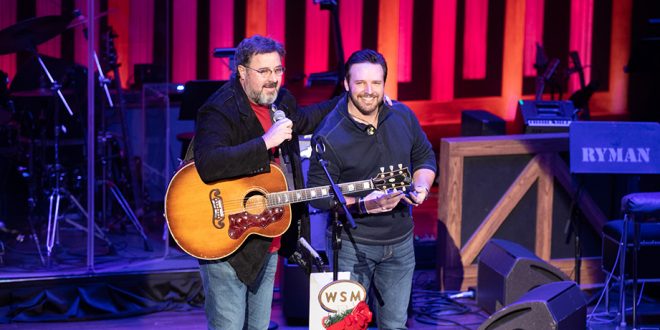 The show that made country music famous was a place of celebration leading in to the upcoming holiday week tonight, recognizing Opry staff musician Jimmy Capps’ 60th anniversary of Opry performances and inviting longtime favorite Mark Wills to become an official part of the Opry family.

Musicians Hall of Famer Capps, who first played the Opry as a teenager with the Louvin Brothers in December 1958 before going on to work with the Opry band, joined in with his bandmates on a medley of country standards on which he played in the studio and on the Opry stage, among them “The Gambler,” “He Stopped Loving Her Today,” “Elvira,” and “Stand By Your Man,” to name just a few. After the performance, segment host Marty Stuart called Capps center stage, where he and Opry member Vince Gill announced that the band room at the Grand Ole Opry House is officially being named the Jimmy Capps Music Room.
Afterwards, Capps signed copies of his just-released autobiography “The Man In Back.”

Concluding an emotional night an hour later, segment host Vince Gill stood center stage and said to Wills, “We at the Opry would like to ask you to become the next member of the Grand Ole Opry.”
“This boy has been the greatest supporter and proponent of what the Opry stands for,” Gill continued.

Upon hearing Gill’s invitation, Wills dropped to his knees before standing tall and saying through tears, “I would love to be the next member of the Grand Ole Opry.”
Wills closed the poignant show by singing dis hit “Don’t Laugh At Me” as Opry members joined him on stage.

Academy of Country Music Top New Male Vocalist winner and a multi-platinum seller who began playing the Opry shortly after launching his career in 1996. His catalog features eight Top 10 hits including a seven-week No. 1 single with “19 Something,” plus “Wish You Were Here” and “Don’t Laugh At Me”, all of which received numerous award nominations.

Music editor for Nashville.com. Jerry Holthouse is a content writer, songwriter and a graphic designer. He owns and runs Holthouse Creative, a full service creative agency. He is an avid outdoorsman and a lover of everything music. You can contact him at JerryHolthouse@Nashville.com
Previous John Scott Sherrill Set For Last Show At Bobby’s Idle Hour
Next TONIGHT: Moon Taxi Plays 10th New Year’s Eve Performance in Nashville