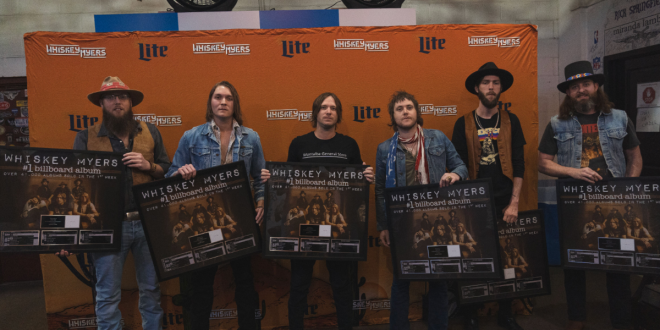 Whiskey Myers On A Sell-Out Roll

Country-rockers Whiskey Myers continued their run of touring success in impressive fashion last weekend, performing to more than 10,000 fans across back-to-back nights at the famed Billy Bob’s Texas honky tonk. Saturday’s show marked their 9th sell-out of 2020, building upon a trend that began last year when they sold 92% of all available headlining show tickets.

With a seated arrangement on Friday, Feb. 7, and a standing room floor on Saturday, Feb. 8, the band gave each crowd unique shows which were both marked by Whiskey Myers’ signature brand of hard-rocking music combined with poignant storytelling.

They were also honored ahead of Friday’s show with a plaque commemorating the success of self-produced and independently-released album WHISKEY MYERS.

The album debuted atop both the Country and Americana/Folk charts with its Sept. 27 release, moving more than 40,000 first-week equivalent album units (of which 39,000 were pure album sales) to also land as the No. 2 Rock album and No. 6 on the all-genre Billboard 200.

Music editor for Nashville.com. Jerry Holthouse is a content writer, songwriter and a graphic designer. He owns and runs Holthouse Creative, a full service creative agency. He is an avid outdoorsman and a lover of everything music. You can contact him at JerryHolthouse@Nashville.com
Previous Maren Morris Hits The Top Of The Charts
Next Lainey Wilson To Make Grand Ole Opry Debut