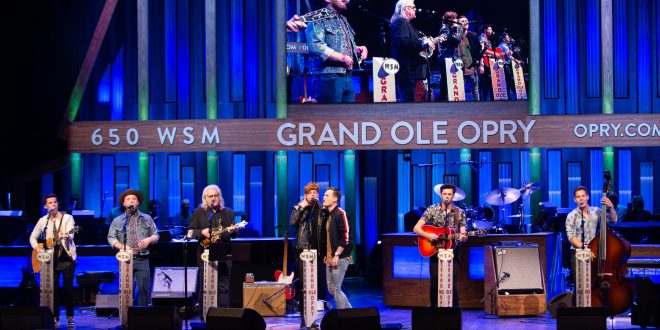 On Saturday night, Country Music Hall of Fame member, Ricky Skaggs jumped on stage at the Grand Ole Opry with emerging Nashville-based band King Calaway for a performance of The Eagles’ “Seven Bridges Road.” The bluegrass-infused cover featured Skaggs on mandolin and King Calaway’s own Austin Luther on stand-up bass along with seven-part harmonies (fitting for the song). Watch above.

“When we made our Grand Ole Opry debut, I got a chance to see Ricky perform in his dressing room and I was so moved, I couldn’t believe I got to witness one of my idols so in his element now, getting to perform with him and on the Opry stage, it was a dream,” said King Calaway’s Caleb Miller.

Aiming to recapture the magic of the Opry performance, Skaggs and King Calaway will reunite at the band’s performance on the Firestone Country Roads Stage at Ascend Amphitheater on Thursday (June 6). This will mark the rising Country stars’ first CMA Fest where they will also be performing at the HGTV Lodge.

Following CMA Fest, King Calaway will add another milestone to its rising journey, as they are set to make their national television performance debut June 10 on Jimmy Kimmel Live. The band will perform their hit single, “World For Two”, off their self-titled debut EP released in January. “World For Two” was the most added song at country radio in its first week at US radio, has been in the Top 5 for consumption per spin and streams per spin for the past six weeks and continues to grow rapidly across streaming platforms.

King Calaway recently opened for Garth Brooks at his U.S. Bank Stadium show in Minneapolis, MN on May 3, 2019. Garth himself introduced the band onstage as the opening act, marking the first time he had done this in his career. The band has been named one of seven country acts to watch in 2019 by Billboard, who praises the EP as “rife with thick harmonies [and] poppy energy” and named as one of “2019 Artists To Watch” by Amazon Music.

Music editor for Nashville.com. Jerry Holthouse is a content writer, songwriter and a graphic designer. He owns and runs Holthouse Creative, a full service creative agency. He is an avid outdoorsman and a lover of everything music. You can contact him at JerryHolthouse@Nashville.com
Previous Still Time to Vote for CMT Nominees
Next Celebrity Bass Tournament Raises $80,000 For T.J. Martell Foundation