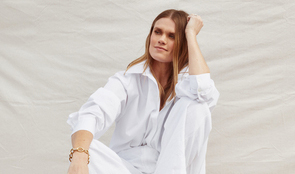 The official music video for songwriter Nicolle Galyon’s new song, “Five Year Plan” is out now. Released in celebration of her 15th wedding anniversary today, “five year plan.” was written by Galyon and her husband, Rodney Clawson. Watch above.

Of the video, Galyon shares, “This is the first and only song Rodney and I have ever written about us. So it feels right for the video to come out on our 15th wedding anniversary. Here’s to a lifetime of plot twists.”
“Five Year Plan” is from Galyon’s debut album, firstborn, which was recently released on her own label, Songs & Daughters. A striking personal statement, Firstborn tells Galyon’s life story in song form. From her humble beginnings that lead her towards a life of overachieving, to grappling with knowing only half of her family tree, to the constant juggle between motherhood and career and everything in between. The project is a musical memoir and fully realized artistic declaration from one of Nashville’s most successful and beloved songwriters.

In celebration of the record, Galyon will perform a special show at Nashville’s CMA Theater at the Country Music Hall of Fame on November 1. She also recently made her Grand Ole Opry debut as an artist, was selected as SiriusXM The Highway’s latest “Highway Find” artist and featured as the cover honoree of Nashville Lifestyle’s annual “Women in Business” issue.

In her own words, Galyon shares, “It is not lost on me that most artists releasing their debut album are about 20 years younger than me, which is often why the themes of this record rarely see the light of day. This record is not for Nashville. Or the radio. Or even for me necessarily. It is for my kids, Charlie & Ford, who I hope—partly because of firstborn—will one day do the precious work of digging deep into their own life stories. I pray they will one day know where they came from…because I fought to leave them something that showed them who they came from. And today this woman is bold and vulnerable and tough and honest and fiercely committed to showing up. Much like my own mother did for me, 38 years ago, when I was firstborn in a town called Winner.”

Born in Winner, SD, raised in Sterling, KS and now based in Nashville, TN, Galyon has written nine #1 singles including Miranda Lambert’s ACM Award-winning “Automatic” and Dan + Shay’s multi-platinum, ACM Award-winning “Tequila.” She’s also received a Grammy and CMA Awards nomination, earned a Triple Play Award and was honored by BMI as their 2019 Songwriter of the Year. In addition to her work as a songwriter and artist, Galyon founded the female-focused label and publishing house, Songs & Daughters, in 2019, which includes artists Hailey Whitters, Tiera Kennedy, Madison Kozak, Lauren Watkins and more. Galyon was named 2020 Kansan of the Year for her continued service and commitment to her home state, which includes partnering with SongFarm and Save The Music to install a recording studio in Sterling High School and others throughout the country.

Music editor for Nashville.com. Jerry Holthouse is a content writer, songwriter and a graphic designer. He owns and runs Holthouse Creative, a full service creative agency. He is an avid outdoorsman and a lover of everything music. You can contact him at JerryHolthouse@Nashville.com
Previous Luke Combs Makes History In Arena Tour Sales
Next PREMIERE: Bern Kelly’s “Garden City”