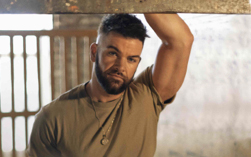 Dylan Scott debuted his fiery new music video,” New Truck” on his Youtube channel last week. The video is in support of his new single which impacts radio on August 9th. This is the follow up to Dylan’s second No. 1 RIAA Gold-certified single, “Nobody,” which also garnered Dylan the, CMT Music Award for “Breakthrough Video of the Year.”

The video was directed by Broken Poet Productions, Eric Welch, with Scott McDaniel producing the project. Going back to 2016 this is the sixth video that Welch has directed for Dylan including the award-winning music video, “Nobody”

The song was written by HARDY, Hunter Phelps, Ben Johnson and Ashley Gorley and Dylan told CMT that, “When the songwriters pitched “New Truck” to me, the concept and lyrics stood out immediately. It’s not just a song about a truck, but there are elements of a story about a relationship ending, where you get into your truck, and you find a picture of them, a tube of Chapstick, or their ponytail holder under the seat. The lyrics are [written] in a way that I’ve never heard before. To say, “I need a new truck because I’m still seeing [my ex] over in the passenger seat,” that’s cool. It’s different”

You can find Dylan on tour this Summer and Fall providing direct support for Luke Bryan on his “Proud To Be Right Here Tour.”

Music editor for Nashville.com. Jerry Holthouse is a content writer, songwriter and a graphic designer. He owns and runs Holthouse Creative, a full service creative agency. He is an avid outdoorsman and a lover of everything music. You can contact him at JerryHolthouse@Nashville.com
Previous Cole Swindell Scores His 10th Career No. 1 Single
Next Gibson Launches New Record Label