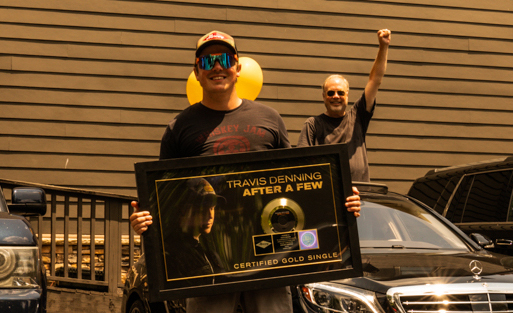 Mercury Nashville Recording artist Travis Denning is racking up another accolade, with the news that his recent No. One hit single “After A Few” has officially been certified GOLD by the RIAA, with over 500,000 units of the song being consumed since its release. Denning was surprised by his team at Universal Music Group, Red Light Management, RED Creative and WME with a drive-by celebratory parade in Nashville, TN to mark the milestone. Denning co-wrote “After A Few” with Kelly Archer and Justin Weaver, and just released his instantaneous follow up single to country radio.

“Definitely not the normal way to celebrate a gold record, but I was once again blown away by the love and support from my team,” shared Travis Denning. “The drive-by congratulations was awesome and hilarious. So happy and thankful to be able to finally say ‘After A Few’ is GOLD!”

Music editor for Nashville.com. Jerry Holthouse is a content writer, songwriter and a graphic designer. He owns and runs Holthouse Creative, a full service creative agency. He is an avid outdoorsman and a lover of everything music. You can contact him at JerryHolthouse@Nashville.com
Previous Marcus King Announces Four Night Livestream Series
Next WATCH: Tyler Childers Debuts “Country Squire”