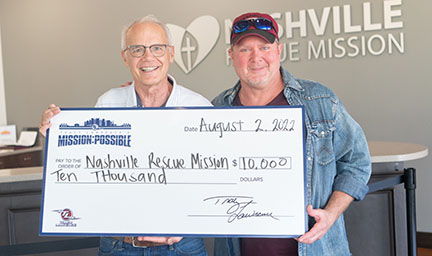 “It was a little overwhelming.. we handed out some pretty substantial checks,” Lawrence describes the heartwarming day, “It’s an amazing thing to be able to give that kind of stuff to people that are going to do such wonderful things with it.”

“Having the golf tournament raise $430,000 in just the second year is truly incredible,” shared Lawrence, “My peers really showed up this year and I am so thankful for their support in helping Mission:Possible. It’s because of them we are able to help our community is such a large way.”

Music editor for Nashville.com. Jerry Holthouse is a content writer, songwriter and a graphic designer. He owns and runs Holthouse Creative, a full service creative agency. He is an avid outdoorsman and a lover of everything music. You can contact him at JerryHolthouse@Nashville.com
Previous Final Nominees For The CMA Awards To Be Announced 9/7
Next Pet Community Center Hosts 15th Annual Art for Animals at OZ Arts Nashville