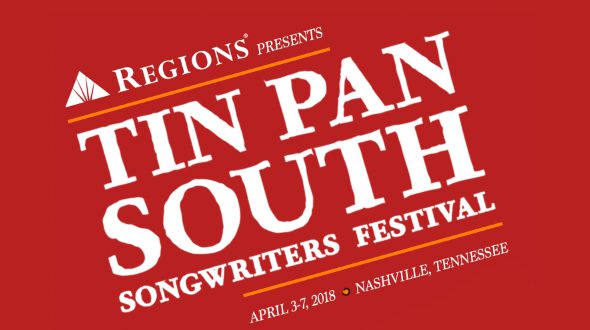 The 26th Annual Tin Pan South Songwriters Festival has launched the 2018 Festival app. The intuitive app was introduced last year and quickly became a popular tool for attendees to make the most of the five-day event. Several hundred songwriters are set to perform at 10 of Nashville’s most popular venues April 3-7, 2018.
The free Tin Pan South Festival App is currently available in the iOS and Android app stores or at TinPanSouth.com.
Features include:
The Tin Pan South Fast Access Passes, which permit patrons to bypass the cover charge at the door and allow advance entrance, space permitting, go on sale at TinPanSouth.com on Tuesday, March 6, 2018 at 10 a.m. Central. The cost is $130.00 for NSAI members and $150.00 for non-members. Quantities are limited, and last year’s passes sold out in record time.
Produced by Nashville Songwriters Association International (NSAI), Tin Pan South reigns as the world’s largest all-songwriter festival. The 2017 festival featured over 400 talented songwriters performing 100 shows during the five-day event. Regions Bank returns for the 11th consecutive year as the presenting sponsor of the Festival.
Stay tuned in the coming months for information about venues, lineups and more.

Previous 100 Days Until Bonnaroo!
Next Larry Gatlin Returns to ‘Opry Country Classics’ at the Ryman