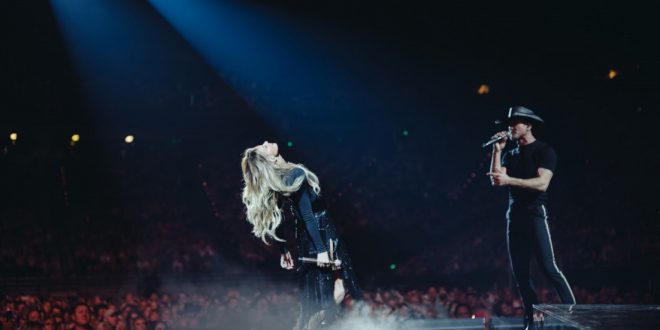 This past weekend, Tim McGraw & Faith Hill brought the heat and unofficial start of summer with the 2018 kick-off of their Soul2Soul The World Tour with three consecutive sold out shows in Richmond, VA, Charleston, WV, and Lexington, KY. The tour continues tomorrow night in Baltimore, MD at Royal Farms Arena and will travel to 20+ cities and thousands of fans throughout the summer, bringing its sharp production, deep catalog of hits, and McGraw & Hill’s palpable chemistry.     Tickets for the Soul2Soul tour are on sale here…

The Soul2Soul World Tour – which has sold over 1 million tickets since its initial trek that spanned April-October 2017 – has been a fan favorite and critical success from its launch, with rave reviews and sold out shows. The tour was the #1 Country Tour in Billboard’s Boxscore and among the Top 10 North American tour and Top 20 Worldwide tour all-genres in Pollstar’s year-end 2017 charts.

Tim McGraw & Faith Hill’s Soul2Soul tour was in Nashville August 2017 – however, tickets are on sale for the rest of their tour HERE.