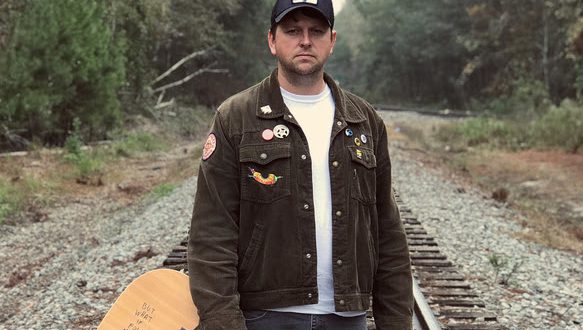 Skate Mountain Records will release Cotton Fields and Blood For Days, the second full-length recording from the Mobile, Alabama-based singer/songwriter ABE PARTRIDGE, on January 26, 2018.
Partridge is one of the most respected songwriters on the burgeoning Mobile music scene. Ranging from the earthy to the surreal, from the spiritual light to the depths of depression, the 8 original songs come together with a gripping intensity. Partridge draws listeners in with a combination of southern gothic storytelling and a dark humor reminiscent of the late Townes Van Zandt – delivered in a gravelly tone that conjures up images of Tom Waits in his barstool warming days. The album closes with a stirring rendition of the traditional song “Satan Your Kingdom Must Come Down” that would make Screamin’ Jay Hawkins proud.
Cotton Fields and Blood For Days was produced, mixed and mastered by Shawn Byrne at Great Hill Studio in Nashville. In addition to Partridge on vocals, guitar, banjo and harmonica, the recording includes: Byrne on guitar, mandolin and bass guitar; Courtney Blackwell on cello; Molly Thomas on backing vocals; and Thelonious Jefferson Scruggs on percussion.
Partridge is rapidly developing a solid reputation as a powerful performer playing songwriter festivals and listening rooms around the Southeast; he is particularly well-received in the music loving state of Texas.  Dripping Springs Songwriters Festival producer Jim Halfpenny comments, “Abe Partridge is that special kind of singer/songwriter who has the ability to connect with just about any audience. His songwriting is top notch and his stage presence and song delivery are nothing less than stellar.  Everyone should keep an eye on Abe Partridge – his future is bright.
U.S. Tour Dates:
Sat, Jan 13—Newnan, GA—Vinylyte Records/Brown’s Guitar Mill
Sun, Jan 14–Dahlonega, GA–The Crimson Moon