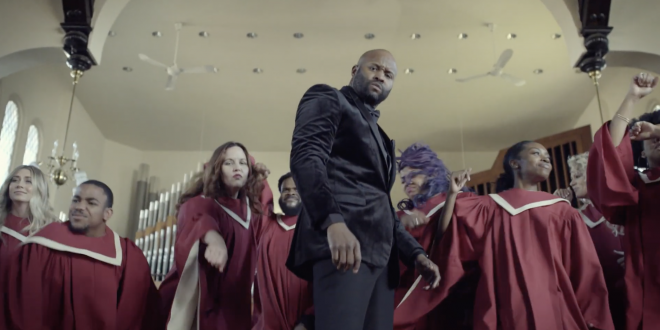 Shannon Sanders And The Nashville Urban Choir Release ” Fight On”

“Fight On” from Shannon Sanders and the Nashville Urban Choir is a resolution anthem. The song is being purposefully released on Feb 8th, 2019, in honor of and in celebration for Black History Month, which lands at that moment in the new year when commitment to new intentions begins to wane and the reality of the work required to push past old habits sinks in. “Fight On,” written and performed by Sanders (vocalist, songwriter, producer, musical director, philanthropist, and program director of Nashville’s 102.1 The Ville), features a rousing neo-gospel performance from the Nashville Urban Choir. Today, Billboard is premiering the video for “Fight On,” calling the song “powerful” and noting its ability to “uplift and inspire.”

“Fight On” is the first of many releases to come from the newly inked partnership between Blue Rose Music and Sanders. “Nashville has become a national story for many reasons, and we saw a great opportunity with Shannon to work with someone who has deep roots in the city, with a sterling reputation and a track record of hit songs, who makes it possible for us to plug into a pool of undiscovered talent,” says Blue Rose Music founder, Joe Poletto. “Fight On” features footage of the choir performing at the legendary Fisk University Chapel decidedly juxtaposed with scenes of Sanders, a lifetime Nashvillian, attacking a stream of vocal gymnastics in gritty, insider locations around town. The video also features an epic scene of SANDERS performing on Nashville’s iconic John Seigenthaler Pedestrian Bridge.

The Nashville Urban Choir, the creative brainchild of SANDERS, symbolizes a growing and maturing city, one with a newfound respect and appreciation for the stylistic breadth of music that has always been created in Nashville’s urban neighborhoods, but is just starting to be recognized. Featuring a revolving cast of independent and up-and-coming artists from a variety of genres, the choir’s diverse voices come together to experience moments conceived and executed by SANDERS’ vision, often at the request of some of the industry’s most successful producers and artists.

The choir can be heard on upcoming recordings from Kaleo , as well as several Dave Cobb-produced albums including Rival Sons and Robert Randolph . The group capped off 2018 with a performance at the 2018 CMA Awards with Chris and Morgane Stapleton in a performance with Gospel legend, Mavis Staples; pop-crossover artist Maren Morris, and country music all-star, Marty Stuart, who played Pop Staples’ guitar. Watch the performance here .

A proud product of Nashville’s south side, Sanders says of his hometown, “ Many music creators move here to pursue a career in the industry, but for me it all started here.” He grew up in gospel music and was an All-State trumpet player in school, but produced hip-hop records with his friends, making their own deals with record stores in the city. At the time, Nashville was all about country music and “Nobody here was interested in promoting hip-hop or R&B until the bottom fell out of the record industry and diversity was the only option to maintain the city’s robust musical eco-system,” says Sanders. “Now people are becoming more aware of all of the great music that has always had roots here.” With this perspective and a long list of accolades (two GRAMMY awards, two EMMY awards, and a DOVE award), it’s easy to see why Cobb calls Sanders “a genius.”

“Fight On,” written as Sanders was processing industry shifts, is his statement on full display, inviting viewers of the music video into the city he will always call home. “There is a need for cultural authenticity in Nashville, beyond the borders of the Music Row’s status quo,” says SANDERS. “I am particularly excited about partnering with Blue Rose Music,” Sanders explains. “What is most powerful is that we share similar values in that our appreciation for music and our desire to have a positive cultural impact supersede our commercial aspiration.”

Music editor for Nashville.com. Jerry Holthouse is a content writer, songwriter and a graphic designer. He owns and runs Holthouse Creative, a full service creative agency. He is an avid outdoorsman and a lover of everything music. You can contact him at JerryHolthouse@Nashville.com
Previous Trisha Yearwood To Celebrate 20 Years As Opry Member
Next Lynyrd Skynyrd Announces Last Dates For Farewell Tour