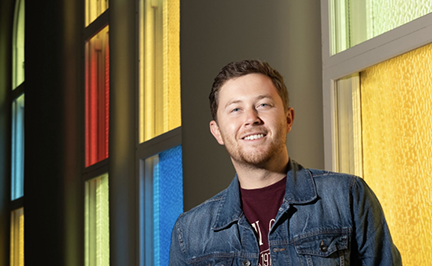 Scotty McCreery To Perform His First Concert At Ryman

Scotty McCreery will perform at the historic Ryman Auditorium in Nashville, Tenn. on Wednesday, March 11, 2020. This will be the Triple Tigers recording artist’s first concert at the “Mother Church” in six years. Special guests for this show will be singer/songwriter Heather Morgan and rising star Adam Doleac.

“When you play in Nashville, you’ve got to be on your A-Game, and when you play the Ryman Auditorium, you have to give it everything you’ve got,” said an excited McCreery. “I cannot wait to be back on that stage where my heroes have performed. I’ve been looking forward to this for a while now. We’re going to have a fun night.”

McCreery is currently in the Mediabase Top 40 and rising with his song “In Between,” the third single from his album Seasons Change. He co-wrote all 11 songs on the album, which debuted at No. 1 on the Billboard Top Country Albums chart and achieved one of the strongest first weeks for a country music album in the last year, moving over 40,000 albums in the first week alone. The first single from the album was the Platinum-certified No. 1 hit “Five More Minutes,” the touching tune which People Magazine calls “an emotional walk down memory lane” and which the professional songwriting membership of the Nashville Songwriters Association International (NSAI) named one of the “Top 10 Songs We Wish We’d Written” in 2018. “This is It,” the album’s second Platinum-certified single which spent two weeks at No. 1, was inspired by the North Carolina native’s engagement to his high school sweetheart (and now-wife) Gabi and has quickly become a wedding song standard.

The grandson of two military veterans, McCreery will host the 2019 iHeartCountry “One Night for Our Military” Veteran’s Day radio special in November, where he will also perform along with artists Jason Aldean and Kelsea Ballerini.

Music editor for Nashville.com. Jerry Holthouse is a content writer, songwriter and a graphic designer. He owns and runs Holthouse Creative, a full service creative agency. He is an avid outdoorsman and a lover of everything music. You can contact him at JerryHolthouse@Nashville.com
Previous Shenandoah And Brad Paisley Raise $350,000 For Alzheimer’s Association
Next Carrie Underwood Sells Out Madison Square Garden Twice