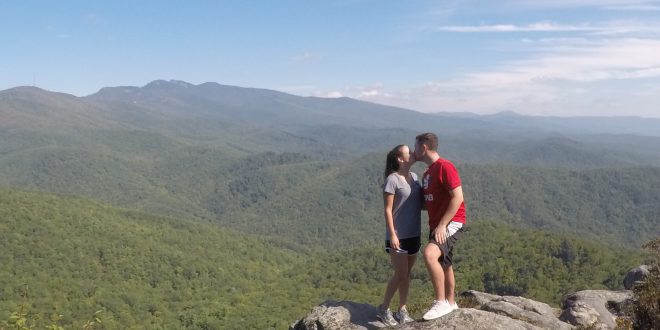 The man voted “Country Music’s Hottest Bachelor” will soon give up the title as Scotty McCreery and his longtime girlfriend Gabi Dugal are engaged. The couple plans to wed in 2018.

McCreery proposed to the love of his life today at one of their favorite places on the planet: the mountains of North Carolina near Grandfather Mountain. The singer/songwriter asked Dugal to go on a hike with him on their favorite trail, which they discovered just last year. Walking up the mountain, the ACM, BMI and CMT Award winner patiently waited for the perfect moment to ask his all-important question. When the two arrived on top of the mountain surrounded by stunning views of lush green forests, McCreery got down on one knee, presented a ring he had helped design specifically for her, and asked Dugal to be his wife.

“I’ve been planning this moment for so long that it feels surreal for it to have finally happened,” said an overjoyed McCreery. “Gabi is the perfect girl and my true love, and I cannot wait to begin building our life together as husband and wife.”

The couple met in kindergarten in Garner, North Carolina where the young entertainer made enough of an impression on Dugal that she wrote “Mrs. Gabi McCreery” encircled with hearts in her diary at the time. The two friends grew up together in the close-knit community, and began dating almost six years ago during their senior year at Garner High School. Dugal has appeared in several of McCreery’s music videos, including “The Trouble with Girls,” “Feelin’ It,” and “Five More Minutes.” In his book Go Big or Go Home: The Journey Towards the Dream which was released in 2016, McCreery brought their romance into the public spotlight. She frequently accompanies him at award shows, red carpets, and events, and has won the respect and adoration of his fans.

“My fans instantly embraced Gabi once they learned we were dating and have always been loving towards her,” said McCreery. “When she graduated college last year, many of them brought me gifts for her at my shows and book signings. I will always appreciate their kindness to her.”

Dugal is a graduate of the University of North Carolina, and currently works as a pediatric cardiac nurse at Duke University Hospital.

McCreery is currently on the country singles charts with his poignant Top 40-and-climbing hit single “Five More Minutes” which has already received more than 22 million streams. The music video, which debuted on People.com in May, has been number one on GAC-TV’s “Great American Top 20 Countdown” for six weeks. The entertainer has been in the recording studio working on his new album, which will be released on his new label home, Triple Tigers Records / Sony Music Entertainment, in 2018. He was the surprise opening act for Garth Brooks in Sioux Falls, South Dakota last Friday (9/22) to the enthusiastically screaming delight of nearly 13,000 fans.