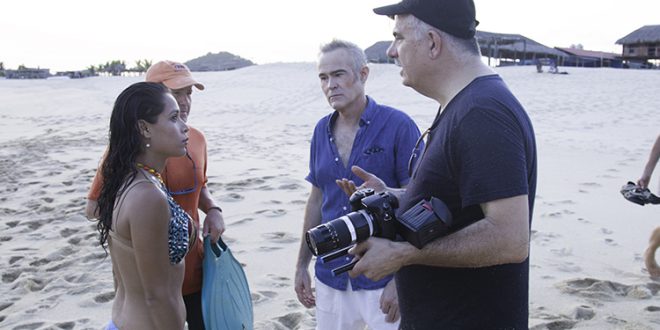 Award winning Canadian roots-rocker and friend of Nashville.com, Sean Hogan, is back with a brand new song and video slated for inclusion on his 7th studio album expected out in late 2018. A little over two months ago, he was in Mexico (Southern Pacific side) in Huatulco. A gem in the state of Oaxaca, where he shot a new music video for a song he wrote named after the area, “Huatulco”. Hogan says he wrote it after a fan at a show a said some of his music reminded him of a place he’d just come back from, called Huatulco, Mexico. Hogan had never heard of the place at the time, and began researching it. “I guess you could say I was sleuthing it out!  I fell in love with the location and natural beauty as anyone would and I began to write about the place and it’s many attributes.” I never imagined a real estate company, Bayside Real estate which is based there would hear it and offer to bring me down to shoot a video in exchange for having their surf boards placed in the music video production.  I said, “sounds good to me.” Hogan goes on to say, “times being what they are; challenging to say the least at times with music industry changing so fast. I recently heard something that I will swear by too, that being, we used to hear about thinking outside the box, I guess people used to think within the metaphorical “box”, but now it is highly suggested to forget “the box”  and think about things with “ no box” in the scenario whatsoever, that’s the way things are.
https://www.youtube.com/watch?v=e81n-Bg31ZU&feature=youtu.be
Hogan has won multiple Canadian Country Music Association awards for Roots Artist and Male Artist of the Year as well as West Coast Music Awards and for a time living on Canada’s prairies he won some Saskatchewan awards too.  Based on Canada’s West Coast, on Vancouver Island, Hogan is no stranger to Nashville. He had his U.S. work visa for a few years too up til about 6 years ago, when he fought a battle for his life with Stage 4 cancer of the head and neck. “It’s a blessing I can still sing let alone everything else.  In fact I think I sing better than ever perhaps, as I sing so much since having cancer and continue to make living solely from a career in music. I’ve written some great tunes with several friends who are songwriters in Nashville. Likely one of the great opportunities was writing with Pat Alger. It was like I imagine the force of a Jedi Knight would be felt,  but seriously some great times spent in the Music City in my career. People like Mike Kinnamon and so many other folks have been supportive of my independent efforts for well over decade there. I think some opportunities will come but Hogan says his next album, 7Come11 and his 7th studio album with 11 new tracks, holds more than one meaning in the title. The music business is even more of a gamble than ever.”
However his current single is called CalifornIA. He wrote it after reflecting about being in Long beach, California in when he received word he was now officially cancer free in March 2012. He says we all need to run and get away at some point I feel the song captures the spirit of that sentiment. Huatulco will be out there simultaneously doing it’s thing for beckoning tourists to warm beautiful places like its name sake.

“Been nearly a quarter century maybe more now, that I’ve made my living playing and recording music as a career. Over a decade before that, as a kid trying to get to this point”, says Hogan.

“I’ve had my share of luck though. When I was 20 or so, a friend’s mom said Sean you say you’re lucky but there’s a saying the harder you work the luckier you get. I never forgot that either I guess. Canadian born but just by a mile from the U.S. side of the St. Clair River Sean Hogan grew up listening in to heartland rock coming out of the Motor City, Detroit Rock City, Motown it all made me tick says Hogan.” For more info checkout www.SEANHOGAN.NET