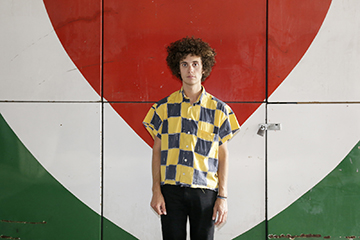 If you haven’t seen Ron Gallo at Bonnaroo or disrupting traffic in Nashville then you’re in luck because he’ll be back at Bonnaroo this year. Ron Gallo will release the vinyl edition of his Really Nice Guys EP on Record Store Day, April 21st, 2018. Released in January on compact disc and digitally, the 8-song set was produced by Joe Bisirri & Gallo and is a concept EP which pokes fun at himself and the year he spent supporting his New West Records debut, HEAVY META.
Really Nice Guys features songs about rough mixes (broken into three parts: iPhone demo, live band demo, and overproduced, autotuned studio recording), the inability of saying a band is bad, so we say “they’re really nice guys” instead, all of your friends asking to be put on the guest list for your show, etc. It also features Gallo’s mother’s boyfriend Jerry’s amazing, real-time thoughts after hearing Really Nice Guys for the first time throughout the EP, captured by a hidden microphone. Consequence of Sound premiered the EP in full, along with a track-by-track from Gallo. They state, “While the singer-songwriter continues to deliver poignant and snarky commentary through his blend of garage-y ’60s rock, Really Nice Guys redirects his cynical wit towards the very music industry of which he’s a part.” Noisey premiered the video for the EP’s title track, which is based on an early 00’s skateboarding video, with Gallo performing super underwhelming tricks. Gallo also premiered the 20-minute Really Nice Guys documentary via Napster’s socials last month. The short film was directed by Christian Gentry and Gallo says, “Partnering with Napster to premiere it seemed like the perfect match — they ruined the music business in 1999 and we ruin music in 2018.”
“Write what you know, Ron Gallo!” he says. “Being constantly on highways, in vans, on planes, on stages, in green rooms, on guest lists, turning a person into a brand, turning a real life human moment into a song, into content, into an asset to be monetized, talking to people about myself and stuff I wrote 3 years ago, watching it all unfold in the public eye from a phone in a van on a highway heading to a stage.” He continues, “It wasn’t what I thought it would be and it was beautiful and I am grateful, but mostly this whole world or pursuing music and the music business is hilarious. So how do you deal with that? Have fun by entertaining yourself with an EP of you laughing at yourself about all of it and call it Really Nice Guys, which is probably all I’ve been for most of this.”
Last year saw Gallo support Spoon, Hurray For The Riff Raff, The Black Angels, Thee Oh Sees, Twin Peaks, and co-headline with White Reaper between his own headlining tours. He also appeared at multiple music festivals including Lollapalooza, Governor’s Ball, Austin City Limits, Voodoo Music Fest and more. Gallo has announced his initial 2018 tour dates which include appearances during both weekends at the Coachella Valley Music and Arts Festival, Bonnaroo Music & Arts Festival, Levitation Festival, Hangout Music Festival, Firefly Music Festival and more. Gallo will also be appearing multiple times at the SXSW Music Festival in Austin, TX this week.

Music editor for Nashville.com. Jerry Holthouse is a content writer, songwriter and a graphic designer. He owns and runs Holthouse Creative, a full service creative agency. He is an avid outdoorsman and a lover of everything music. You can contact him at JerryHolthouse@Nashville.com
Previous Joe Nichols Launches Traditional Country Series
Next Charlie Daniels’ and Friends Deliver their Best at the 44th Volunteer Jam