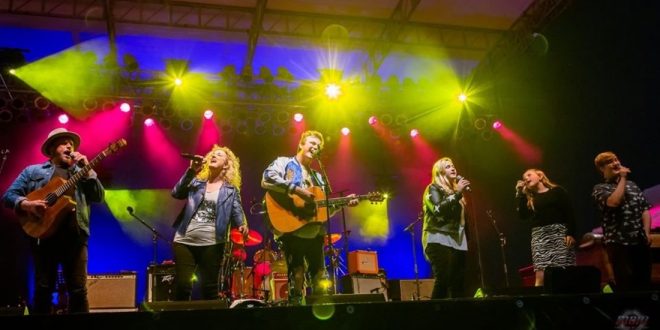 Rockland Road has a lot to celebrate with the release of “Caroline,” the debut single from their forthcoming album scheduled to release in 2020. The single is now available through all streaming platforms and digital retailers. Listen to “Caroline” here.
“Caroline” is an up-tempo, uplifting lost-love song. It was written by award-winning songwriters Greg Barnhill, Reed Waddle, and Stan Karcz and was produced by Greg Bieck. “It felt like all of Nashville wanted us to record ‘Caroline,’” said March Martin. “We were sent songs from every direction imaginable for this project. But ‘Caroline’ came to us from 3 separate industry friends, all unbeknownst to each other. It was very clear we were meant to record this song upon feeling something magical…both in the lyrics and in the way the song found us.” Rockland Road is in the process of filming the corresponding music video to be released in the coming weeks.
Rockland Road, featuring their signature 6-part harmony, is comprised of six members; all sharing the last name Martin. Combined, they play a total of twenty-three instruments and incorporate powerhouse vocals, blending elements of Pop and R&B to form their own rich Country-infused sound.
Rockland Road has been tapped to sing the National Anthem at the 2019 Music City Bowl at 3 p.m. CST on Monday, Dec. 30th at Nissan Stadium.

Music editor for Nashville.com. Jerry Holthouse is a content writer, songwriter and a graphic designer. He owns and runs Holthouse Creative, a full service creative agency. He is an avid outdoorsman and a lover of everything music. You can contact him at JerryHolthouse@Nashville.com
Previous Keith Urban To Headline Music City Midnight With Special Guest Stevie Nicks
Next ‘Charley Pride: I’m Just Me’ Debuts On CBC’s Documentary Channel January 1