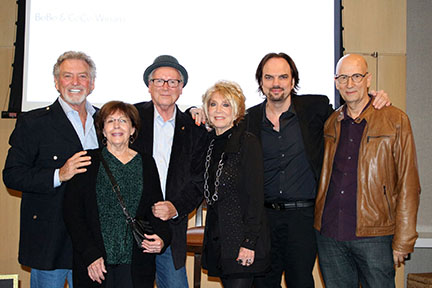 Oermann reminisced about his career in a room full of friends and colleagues; several – including Grand Ole Opry stars Jeannie Seely and Larry Gatlin – joined him to share stories of his industry contributions. Video messages and tributes from such wide-ranging talent as Dolly Parton, Charlie Daniels, K.T. Oslin, Pam Tillis, Trisha Yearwood and Chris Young further showcased the scope and impact of his work.

The event honors people who stand the test of time in telling stories that make the music industry so fascinating – the journalists, interviewers, reporters, show hosts and others who’ve lived, breathed and witnessed these moments alongside the music- and decision-makers of Music Row.

Now the unofficial historian of Nashville’s musical heritage, Robert K. Oermann’s love of music can be traced back to his Pittsburgh childhood, when he clerked in his grandmother’s record store. He moved to Nashville in 1978 for a job with the Country Music Hall of Fame & Museum. His freelance writing put his byline into such publications as Billboard, The Hollywood Reporter, Esquire, TV Guide and – in the early 1980s – the pages of an emerging newspaper called USA Today (as its first country-music reporter and critic). A dozen years with the daily Tennessean made him a Music City staple, as he evolved to become the community’s go-to journalistic source, critic, commentator and tastemaker. His entertaining singles reviews — an anchor of Music Row magazine since its inception in 1981 — have made him a music-industry must-read.

Music editor for Nashville.com. Jerry Holthouse is a content writer, songwriter and a graphic designer. He owns and runs Holthouse Creative, a full service creative agency. He is an avid outdoorsman and a lover of everything music. You can contact him at JerryHolthouse@Nashville.com
Previous Brett Young Named ASCAP Country Songwriter-Artist of the Year
Next Florida Georgia Line Celebrate Grand Opening Of Their Creative Compound