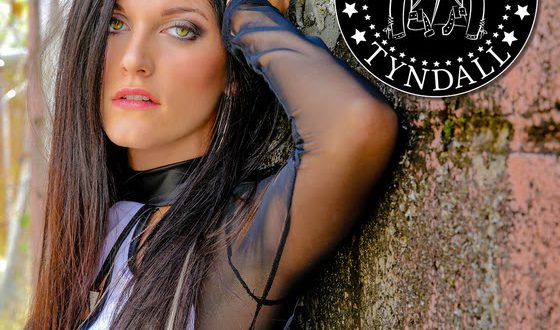 Kasey Tyndall’s sweet southern charm is often rudely interrupted by an impressive collection of rock ’n’ roll t-shirts. AC/DC, Ramones and Guns ’n Roses — crop tops preferably.
She calls her manager Mr. Dave and her agent Mr. Jay – that’s kind of her thing, recognizable by anyone raised in the south.  But she says their name with respect and reverence instead of the sass and flare one would expect from a girl who prefers leather and denim over dresses and heels, just like she prefers a rowdy crowd dancing on a bar top over a seated one golf-clapping after each song.
Don’t be totally fooled — Tyndall isn’t a rocker hiding in a cowgirl town.  Her Eastern North Carolina accent and penchant for aching love songs gives her away as a grounded country thoroughbred.  Tyndall’s debut single, “Everything is Texas” saw great success on the Wild Country Spotify playlist and the video hit Top 10 on CMT’s12 Pack Countdown.
Tyndall has done over 100 tour dates in 2017 with the likes of Kane Brown, Granger Smith, Casey Donahew, Wheeler Walker Jr and The Cadillac Three and there appears to be no slowing down.  In November 2017 she hits the road as direct support for Parmalee on their Hotdamalama Tour. As Tyndall explains,“I love to sing and perform and I’m thankful for anyone who wants to listen.  It’s almost like my fans and I have this team.  It’s kinda the ‘Be who you are’ team.  And I’m blessed to have the best team in the world.”
Tyndall’s journey to Nashville was accelerated in 2014 when she won a radio station contest to sing “We Were Us” with Keith Urban.  Opportunities came quickly after that late summer performance, including signing with WME’s Jay Williams for booking (Eric Church, Luke Bryan, Chris Stapleton, Dierks Bentley).  Neil Mason from The Cadillac Three, Driver Williams from Eric Church’s band and Tommy Cecil are a few of the seasoned writers she’s worked with. A publishing deal with Sony ATV promises to bring more top-end talent to her door.  After working with her, Cecil (Luke Bryan, Jake Owen, North Carolina’s Parmalee) agreed to produce her album, out November 2017.
For more information, visit www.kaseytyndall.com, www.facebook.com/kaseytyndallmusic and @kaseytyndall on Instagram.
ABOUT PARMALEE:
2016 ACM “New Vocal Duo/ Group of the Year” nominee Parmalee is one of Country music’s most successful new acts: The Platinum-selling band of brothers is one of only four groups since 2001 to earn three consecutive Top 10 singles from a debut Country album. Since its debut at Country radio, Parmalee has earned over 339 million Pandora streams, 61.5 million plays on Spotify, over 26.5 million YouTube/ VEVO views, and 1.5 million Shazam subscribers.
Heralded as “Country Music’s Breakout Stars” by MSN Entertainment, Parmalee has supported Brad Paisley and Jake Owen on national tours while finding time to perform on NBC’s TODAY show, The Late Late Show, FOX & Friends All American Summer Concert Series, MLB Central’s Studio 21, The Queen Latifah Show and more. Now Parmalee – comprised of brothers Matt and Scott Thomas (lead vocals/guitar and drums, respectively), cousin Barry Knox (bass) and life-long best friend Josh McSwain (guitar) – returns with the new single “Sunday Morning” from its sophomore album “27861,” sure to propel the hard-living ‘band of brothers’ into Country music superstardom.
For more information, visit: http://www.parmalee.com
ShareTweet