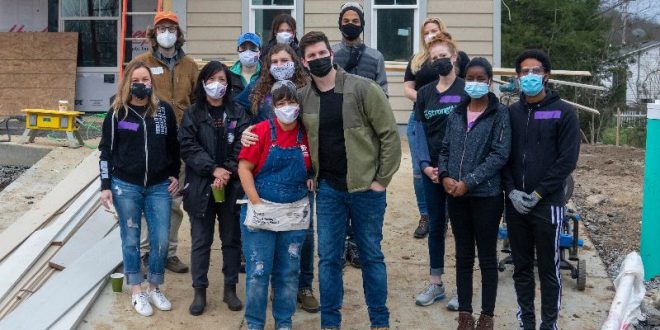 At the Habitat for Humanity of Greater Nashville Park Preserve build site in north Nashville, Raleigh and volunteers helped single mother Bianca Tarantola build a home for herself and her three sons.

Raleigh held a contest for fans via Tik Tok last week, and invited the winners to come to the Habitat build site and work with him. Contestant winner Alice Nelson traveled from Alabama with her family to work with Raleigh on Bianca’s home.

Raleigh has accumulated over 7 million streams across his catalog to date, and has opened for artists such as Eric Church, Brothers Osborne, Florida Georgia Line, Thomas Rhett, Drake White, and Mitchell Tenpenny.

Music editor for Nashville.com. Jerry Holthouse is a content writer, songwriter and a graphic designer. He owns and runs Holthouse Creative, a full service creative agency. He is an avid outdoorsman and a lover of everything music. You can contact him at JerryHolthouse@Nashville.com
Previous Nashville Well Represented At The Grammys
Next Texas Rangers Dedicate Field To Country Legend Charley Pride