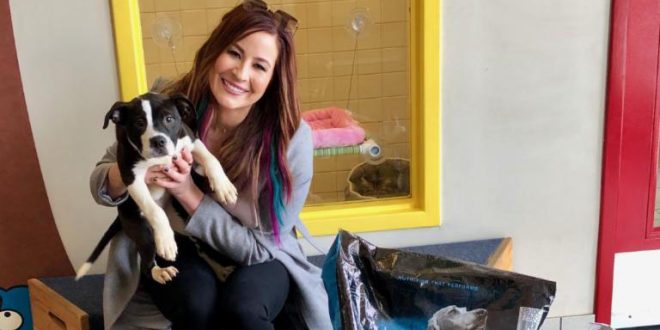 Turn 3 Recording artist and avid animal lover Chelsea Bain asked fans to bring a donation for the Nashville Humane Association as admission to her recent show at The Cowan in Nashville, and they came through in a big way. Today, she delivered over 200 pounds of much-needed pet food and supplies to the Association.
In addition, Chelsea sponsored the adoption of Humane Association resident rescue dog Gunner and promoted his adoption in her concert advertising, on social media and at the concert itself. Gunner was adopted the following day.
“We were really hoping the message would spread about bringing a donation, but this exceeded all of our expectations,” said Chelsea of the donations. “And to have this sweet dog Gunner adopted the next day was just icing on the cake.”
After dropping off the massive contributions, Chelsea was motivated to sponsor the adoption of the Humane Association’s Pet of the Week Lazaro, pictured with Chelsea below. Dog lovers interested in adopting Lazaro or any of the many dogs or cats looking for a permanent home may visit NashvilleHumane.org for more information.
Chelsea recently released her latest single, “Take It Like A Man,” which she wrote with Rachel Farley, Michael Tyler and Ben Stennis. The accompanying music video was shot by Chelsea’s brother, Layne Pavoggi, who is a director in in Los Angeles. Check out the video above.

Music editor for Nashville.com. Jerry Holthouse is a content writer, songwriter and a graphic designer. He owns and runs Holthouse Creative, a full service creative agency. He is an avid outdoorsman and a lover of everything music. You can contact him at JerryHolthouse@Nashville.com
Previous Phil Vassar Is Bringing “Hitsteria” to Nashville
Next Hayes Carll To Perform At The Basement East on April 11