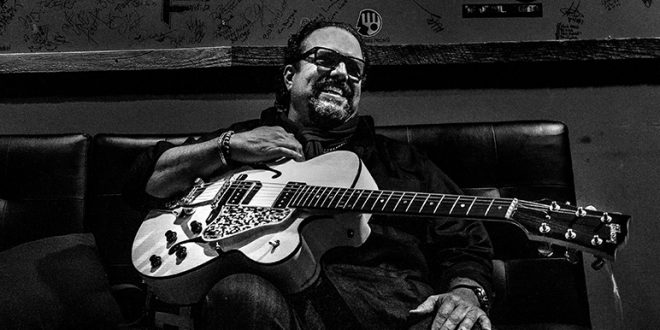 UPDATE: Tonight’s show (3/3) has been canceled and will be rescheduled.

His beautiful baritone is unmistakable and if you’re a Mavericks fan you already know that, but tomorrow night you can hear just him and his guitar in an intimate setting at the City Winery. Raul Malo has such a unique voice, somewhere between Elvis and Orbison and wrote many of the Mavericks hits like “Here Comes the Rain,” “What A Crying Shame”, “Dance The Night Away”, “Back In Your Arms Again”, and “All You Ever Do Is Bring Me Down.” The Miami native took a little time to talk to Nashville.com last week to let us know what he’s been up to.

“We’re finishing up our Spanish record which we’ve been working on for a little bit now in-between other records. It’s been a labor of love that we’ve been wanting to do for a while and we’re finally coming around to the end of it. We’re planning to release it later on this year in the fall” explains Malo. “Spanish was my first language but it’s still very challenging to write in Spanish, it’s not something I do on a regular basis.

When asked about his City Winery solo show Malo jokingly says “It’s just like a Mavericks show only really lame.” But all kidding aside Malo continues, “It’s just me and my guitar, I tell stories about the songs, I share anecdotes and I play a lot of beautiful songs that I don’t get to play with the Mavericks. There’s no set list, you really don’t know what you’re going to get. I know that’s a terrible sales line for a show but it’s kind of true. I step away from what I normally do and give people a little inside to what is that I do.

The Mavericks are still in the midst of their 30th anniversary tour and as far as future projects Malo says there are no signs of slowing this train down. He did tease that they are in talks of doing a show in the future at the Ryman to promote the yet to be named Spanish album.

So if you’re not doing anything tomorrow there are a few tickets left and there isn’t a bad seat at the City Winery so come on out. Showtime is nat 8 p.m. Click here for tickets.

Music editor for Nashville.com. Jerry Holthouse is a content writer, songwriter and a graphic designer. He owns and runs Holthouse Creative, a full service creative agency. He is an avid outdoorsman and a lover of everything music. You can contact him at JerryHolthouse@Nashville.com
Previous Blackberry Smoke Announces New Tour with Stop at Ascend
Next Jimmie Allen Scores His Second Career No. 1