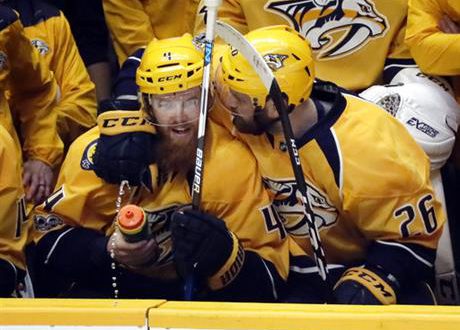 On the first day of rookie camp, Predators General Manager Davis Poile gave some bad news about one of the team’s veterans: Ryan Ellis will be out for four months.

Poile said Ellis is still recovering from surgery to repair a lower body injury he suffered during the Stanley Cup Finals with the Pittsburgh Penguins.

The GM is hopeful Ellis will be ready to return in January of 2018.

In a statement, Poile said, “The initial prognosis on this type of a knee injury is four to six months. Right now, we feel, and the doctor feels, it’s going to take the full six months for him to recover. Ryan is not skating yet, but he will be skating in approximately three weeks and the recovery will go from there.”

He continued, “We don’t expect him back until the end of the year, maybe right around Christmastime. We had a little bit of heads up, and that’s really one of the reasons why we got [Alexei] Emelin from Las Vegas to add to not only our depth but our quality of our defense.”

Ellis is coming off of the strongest season of his NHL career with 16 goals and 22 assists.

The disclosure of the injury clears up why Poile traded for veteran defenseman Alexei Emelin after last season.