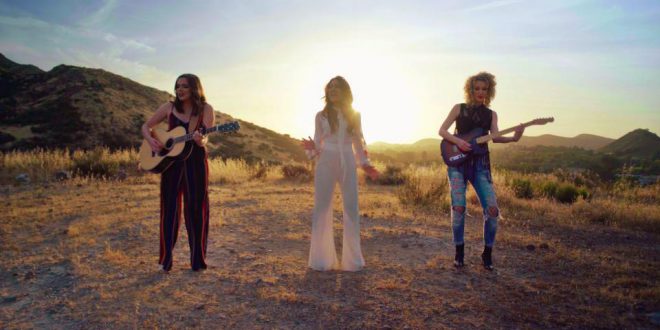 How did you come up with the band name “Honey County?”

We were thinking at first to use the name Green County, but that didn’t sit too well – we were trying to figure out other names for the band, so we took all of our names (first, middle, and last), put them in a word scrambler and ‘Honey’ was one of the names – we decided on Honey County 🙂

How did the three of you meet?

Dani: I was looking for a lead guitar player and Devon was suggested to me. I saw a video of her playing with Keith Urban on Youtube and it was an obvious YES. Then Devon introduced me to her best friend from college at USC, Katie Stump – the three of us really connected and all became best friends.

You have opened for artists such as LeAnn Rimes, Chase Rice, and David Nail – what have they taught you?

We learn a lot from the live shows – from banter to dance moves to semi-dance moves haha. Learning how to talk to the audience is an art form and watching and observing seasoned artists has really upped our live show!

What other artists inspire you?

What was and is it like working with producers Maks Gabriel and John Spiker?

It’s so fun working on our songs with producers on both coasts with Maks in Nashville and John in Los Angeles, it really mixes our roots with pop, a sound we’ve really taken a couple years to hone in.

We’re currently in the studio working on new songs and still have a couple festivals with Jake Owen, Lady Antebellum, Old Dominion & Eli Young Band to play! But the main focus will be on the music 🙂

If you designed your own walking food tour of Nashville, which restaurants/food sellers would be on your list of places to visit?

What’s one memorable meal you’ve had during your travels? Is there anywhere that you haven’t been that you are dying to go?

We are DYING to go on tour with Keith Urban 🙂

We had the most amazing food at a place called The Dock – Katie’s parents took us out there via their boat one night after a gig in Huntington Beach and the food was incredible.

We love performing on stage, it’s such a rush and really exciting – also we LOVE our fans. They follow us everywhere and we’re so grateful to have their support, we love hearing from y’all on instagram and Facebook!

What type of restaurants would “Honey County” have if it were a real place?

We’ve actually joked about this quite a bit! If we had a restaurant it’d be called ‘Honey County Kitchen’ and it’d def. have biscuits and honey on the table, some good home-style cooking but also a lot of healthy options. It’d be a fusion of everything we love with an excellent dessert menu 🙂

ABOUT HONEY COUNTY:
Rooted in three-part vocal harmonies, southern twang, and pop hooks, you won’t find Honey County on any map.
A Virginia native, Dani Rose moved to Los Angeles during the early 2010s. There, she found herself gravitating toward the sounds, stories, and swagger of country music, a genre that had been so prevalent back home. When an opportunity arose to open for LeAnn Rimes, Rose accepted the gig, performing in front of thousands of new fans and, in the process, laying the brickwork for the formation of her own country band.
You won’t find Honey County on any map. Launched in 2014, the group takes its name from a fictional place, a move that allows Rose and her two bandmates — Devon Jane and Katie Stump — to create their own landscape of story-driven country; modern, melodic pop; and punchy, guitar-fueled rock (an influence that’s strengthened by Jane, the trio’s lead guitarist, whose fretwork has landed her gigs with everyone from Keith Urban to Ceelo Green). The band wasted little time developing its audience in California and beyond, earning a spot on the HBO series True Blood with Honey County’s very first single, “Blood From a Stone,” and appearing as semi-finalists on VH1’s Make a Band Famous competition. Meanwhile, shows with artists like Chase Rice, Easton Corbin, David Nail, Clare Dunn, and Dylan Scott kept Honey County busy, adding history and heft to the band’s sound.
Genuine fans of the country music tradition, the members of Honey County have also paid tribute to their influences, creating covers of songs like Little Big Town’s “Girl Crush” (whose video earned more than 122,000 views on YouTube) and Garth Brooks’ “People Loving People” (whose recording notched nearly half a million spins on Spotify). They’ve created even more of a stir with their own music. Produced by Ryan Williams (Kelly Clarkson, Train, P!nk, Adam Lambert), Honey County’s self-titled debut EP spawned the single “99 Bottles,” which received airplay from the SoCal country radio station Go Country 105 and was chosen as a finalist in the station’s 34th annual Country Showdown. With over 80,000 views on YouTube, the song is a showcase for Rose’s voice, Jane’s guitar, Stump’s harmonies, and the blend of three singers who were meant to perform together.