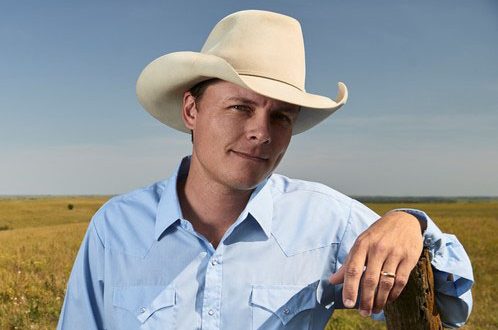 Ned LeDoux released the second song “Upside of the Ground” from his upcoming third full-length album, Buckskin, last week. “Upside of the Ground,” penned by his friend/mentor and producer Mac McAnally, follows on the heels of last month’s release of his album’s self-penned debut song “The Mountain.” Buckskin, to be released March 11, 2022, is now available for pre-order at all digital retailers.

“‘Upside of the Ground’ was a song written by Mac McAnally for my dad,” said LeDoux. “Mac produced two or three of dad’s albums and they were getting ready to record what would be his last studio album Horsepower. Dad showed up to the studio on the first day of tracking and told Mac he thought he had all the songs they needed for the record. Mac just put this song back on the shelf and Dad never did hear it. Fast forward 18 years and I’m putting things together for Buckskin when Mac sends me this song. I got about halfway through it and knew I was going to record it. It’s a fun song and as Mac would say ‘It’s a mouthful.’ Moves along pretty quick and it’s unique, which when it comes to the songs that Mac McAnally writes, they’re always going to be unique. So very proud to have recorded this one.”

Last month, LeDoux released the lyric video for “The Mountain” (listen above) in tandem with the song release which he partnered with Country Now for the exclusive premiere.

Buckskin, like his first two albums Sagebrush and Next In Line, continues his steadfast love of carrying on the traditions, music, values and the cowboy way of life passed down to him by his mom and dad, Peggy and Chris LeDoux. The album, produced by his long-time friend/producer, award-winning Mac McAnally, includes 12 songs, eight of which LeDoux wrote or co-wrote. Buckskin leaves no doubt LeDoux knows where he came from and is proud to carry on the LeDoux name.

“I hope I inspire people to never forget where you came from,” he says. “That’s one thing I’m very proud of. I’m carrying on a tradition, but I’m writing my own story. I’m very proud of my family and friends and there’s one piece of advice my mom gave me when we were kids: ‘Never forget where you came from and show respect to people no matter where you are.’ So with this album I hope to inspire and show people, ‘Hey this old cowboy isn’t changing for nobody.’ I want people to know they should never give up on a dream. There’s always time. Just keep on going.”

LeDoux continues to keep his dad’s legacy and music alive. In addition to his eight original songs on Buckskin, LeDoux has included his dad’s self-penned iconic “He Rides The Wild Horses” one of his favorite songs his dad ever wrote. “On every album I put out I’m always going to record one of my dad’s songs,” he says. “For the Buckskin album, I decided to go with ‘He Rides The Wild Horses.’ This has definitely got to be one of my top five favorite songs that he’s written, and I think it fits perfectly following The Buckskin poem. I really love this song”

In July, LeDoux opened for Garth Brooks at the 125th Anniversary of Cheyenne Frontier Days (and the 50th Anniversary of Chris LeDoux’s self-released album, Songs of Rodeo Life). LeDoux was on hand, with Brooks, for the unveiling of the bronze Chris LeDoux Memorial Statue titled “Just LeDoux It.” Like his son Ned, the statue will forever honor the legacy and reputation of Chris LeDoux as a touring and recording artist and his legacy as a World Champion rodeo cowboy.

Music editor for Nashville.com. Jerry Holthouse is a content writer, songwriter and a graphic designer. He owns and runs Holthouse Creative, a full service creative agency. He is an avid outdoorsman and a lover of everything music. You can contact him at JerryHolthouse@Nashville.com
Previous Road Trip! Forecastle Festival 2022 Lineup, Tickets
Next Dustin Lynch Notches Sixth Straight Week At #1