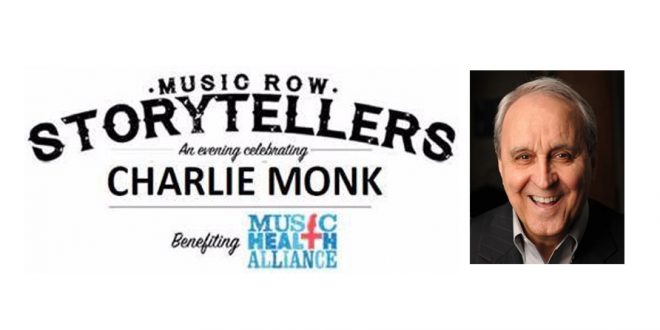 Music Row is lined with stories…but few people have witnessed as many – and have as many to tell – as Charlie Monk. Since arriving in Nashville almost 50 years ago…and through his many roles as disc jockey, publisher, industry leader and satellite radio personality…the “Mayor of Music Row” has lived and chronicled years of country music memories. That’s why he’s being honored as this year’s subject of Music Row Storytellers.

Music Row Storytellers is an event designed to honor those that stand the test of time in telling the stories that make the music industry so fascinating – the journalists, interviewers, reporters, show hosts and others who chronicle and share the stories of Music Row and its musicmakers. The second annual event will be held Monday, October 9 at the Wellspire Center (907 Gleaves St., Nashville TN 37203 – valet parking provided). A 6:00pm cocktail reception will be followed by a 6:30pm program honoring Monk and benefiting Music Health Alliance. The evening will be filled with laughs and stories from Charlie and surprise guests who’ve been part of his career.

Charlie Monk entered the world of entertainment as a radio DJ in the 1950s. A variety of stations in his home state of Alabama provided the basis for a career that brought him to Music City in 1968. Within a couple of years, he transitioned to a role as ASCAP, followed by a move into publishing (at CBS Songs), eventually under his own banner, Monk Family Publishing. It was there that he signed an unknown Randy Travis…nurtured the career of an aspiring Kenny Chesney…and developed the talents of Nashville’s biggest songwriters. After a brief tenure at Acuff-Rose (which returned the legendary publishing house to its original glory), Monk settled into his role as a leader in the music community, serving as an executive and member on the boards of such organizations as NARAS, Nashville Songwriters Association International (NSAI), the Gospel Music Association and the CMA. Also known for his role as a founder of the Country Radio Seminar, his more than three-decades as the host of its flagship event, the New Faces Show, allowed his wit, humor and storytelling to shine their brightest…as they continue to do every time he opens the mic six days a week on SiriusXM’s Channel 59 (Willie’s Roadhouse).

Music Row Storytellers originated in 2016, honoring renown music journalist Hazel Smith, the person responsible for coining the phrase “Outlaw Country” in the 1970s who spent years telling Music Row’s stories as a writer for Country Music magazine, a radio reporter, and a regular columnist for CMT.com. The event drew major label heads, Grammy-winning artists, noted producers and a cross-section of the music community, while raising money for a more-than-worthy cause.

Music Row Storytellers benefits Nashville-based non-profit Music Health Alliance, which fights so those in our industry never have to feel alone in a health crisis. The eight-person team at Music Health Alliance removes obstacles so patients can receive lifesaving care. Thanks to the direct efforts of Music Health Alliance, members of the music community across the 36 states have gained access to lifesaving heart and liver transplants, medications to treat Parkinson’s, end of life care and many other necessary services. Since 2013, Music Health Alliance has saved over $17 million dollars in medical bills and reduced premiums and served over 5,800 people in the music community. Its services are free to any person who has worked in the music industry for two or more years, or who has credited contributions to 4 commercially released recordings or videos. Spouses, partners, and children of qualifying individuals may also receive access to the non-profit’s services from birth to end of life.

The Music Row Storytellers organizing committee is a group of music industry professionals dedicated to celebrating the leaders, influencers and storytellers that “came before,” while providing awareness and financial contribution to a music industry related non-profit organization.