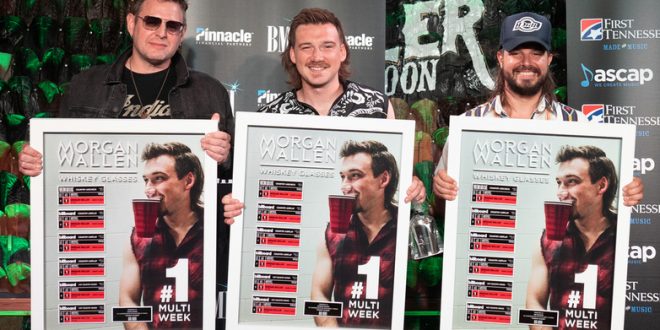 Toasting to an already buzz-filled summer, the room filled with friends, family and industry playmakers joined songwriters Ben Burgess (BMI) and Kevin Kadish (ASCAP) to cheers the monumental third single from Wallen’s debut album If I Know Me, produced by Joey Moi.

“This is obviously a special day for me. No matter how many milestones and achievements I’ve gotten to experience so far, I always think back through my life and what got me here,” said Wallen. “To anyone who has helped with this song, my album, or anything that has to do with my career, just know that it doesn’t go unnoticed. I will do my best to give my 100 percent from here on out. I always have, and I hope I will be able to do that for a long time.”

Adding to the excitement, Wallen is back on Country radio airwaves this week with breezy fan-favorite “Chasin’ You,” captivating listeners on playlists nationwide as the most-added single of the week with 40 stations already on board.

“Chasin’ You” is Wallen’s fourth single from If I Know Me, but his first release to radio with a writing credit. Penned by Wallen, Craig Wiseman and Jamie Moore, the easy-rolling, mid-tempo number traces the lines of what could have been in a love gone wrong.

Wallen continues down the road with Florida Georgia Line as featured support on their nationwide Can’t Say I Ain’t Country Tour through the end of September, then launches a direct support run on the fall leg of Luke Combs’ Beer Never Broke My Heart Tour to finish out the year, including two sold-out  nights at Nashville’s Bridgestone Arena.

Music editor for Nashville.com. Jerry Holthouse is a content writer, songwriter and a graphic designer. He owns and runs Holthouse Creative, a full service creative agency. He is an avid outdoorsman and a lover of everything music. You can contact him at JerryHolthouse@Nashville.com
Previous Janie Fricke Announces 2 CD Greatest Hits Compilation
Next WIN Two Tickets to See The Steel Woods at The Caverns