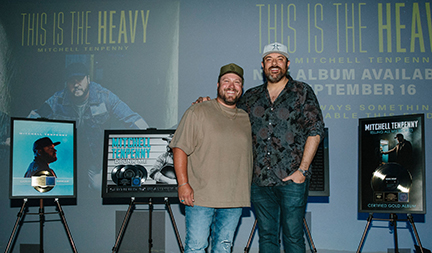 Riser House/Columbia Nashville/Sony Music Nashville hosted a celebration for Mitchell Tenpenny last night to commemorate his reaching -and surpassing- the One Billion streams threshold and his first triple-platinum plaque presentation. The private party was held at Nashville’s Nightscape entertainment and event venue where Mitchell was presented with Sony Music Nashville’s Billionaire award, recognizing his 1.3 Billion career on-demand streams. Mitchell was also presented a 3x Platinum plaque for his first-ever single “Drunk Me” that has now amassed nearly 580 million global on-demand streams, a Gold plaque for his debut album Telling All My Secrets and a Gold plaque for current smash single “Truth About You.”

During the special event Mitchell announced he will release a 20-track album on September 16 titled This Is The Heavy, and he gave an exclusive first-listen to track “Always Something With You.” Pre-order/add/save the album HERE. This Friday, August 5 the album’s full track listing will be revealed. This is the second full length album Mitchell has released since his debut project Telling All My Secrets in 2018, which earned him the best first week showing for any major label country debut LP at the time of its release. Like the first project, Mitchell co-wrote all the songs on his This Is The Heavy album including the album’s first country radio single “Truth About You,” which is currently Top 10 and rising. The project was produced by Mitchell and Jordan M. Schmidt.

“I hope the fans are as excited as I am that this music will be out soon,” expressed Mitchell. “I spent an enormous amount of time writing during the pandemic and sharing bits and pieces of what I was working on along the way. The fans really showed up for me by giving me feedback on what they were liking. Their direction helped shape this album and stretched me as a songwriter and artist.”

Mitchell’s single “Truth About You” originally appeared on his Midtown Diaries EP released last September. Although new to TikTok at the time, he first shared it there and the song instantly became the highest streaming debut of his career with 2.5 million streams in the first three days of its release. That number doubled within a week and the song has now amassed over 125 million on-demand streams. The continued positive reaction from fans prompted its delivery to country radio, where it’s currently in the Top 10. Additionally, Mitchell has a second single on the charts – his collaboration with Chris Young on their co-written Top 10 hit, “At The End Of A Bar.”

Music editor for Nashville.com. Jerry Holthouse is a content writer, songwriter and a graphic designer. He owns and runs Holthouse Creative, a full service creative agency. He is an avid outdoorsman and a lover of everything music. You can contact him at JerryHolthouse@Nashville.com
Previous Nashville Songwriters Hall of Fame Announces Class Of 2022
Next Americanafest Launches Festival App