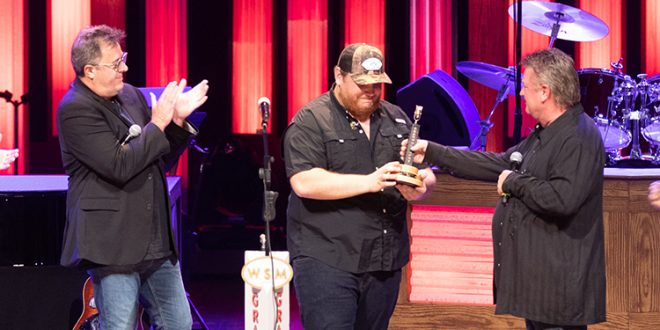 Luke Combs was inducted into the Grand Ole Opry family tonight by Opry members Joe Diffie and Vince Gill in front of a sold-out Opry crowd. Combs grew up on Diffie’s hits like “Pick Up Man” and “John Deere Green,” and the first concert he ever attended was Gill’s. After Combs performed his No. 1 smashes “When It Rains It Pours” and “Beer Never Broke My Heart,” Diffie and Gill joined him on stage, also flanked by Opry members The Gatlin Brothers, Chris Janson, Dustin Lynch, Craig Morgan, and Mark Wills.

“This is what dreams are made of right here,” Gill began. Looking to Combs, he added, “If you’ll come here and you’ll invest in the people and this stage, you’ll get back a hundred-fold what you ever give to this place.”

Presenting Combs with his Opry Member Award, Diffie added, “I remember being asked to be a member of the Opry, and it was like a dream. And it still feels like a dream, even to this day. On behalf of myself and all the Opry members past, present, and future, Luke Combs, you are now officially the newest member of the Grand Ole Opry!”

The hit-maker then rounded out his Opry induction set with his first song as an Opry member, “This One’s For You.”

Backstage, Opry General Manager Sally Williams shared, “Luke Combs’ love for the Grand Ole Opry is rivaled only by country music fans’ love of his music and his fellow Opry members’ appreciation both of his artistry and his friendship. Luke and all of us at the Opry have developed an incredible relationship since he made his Opry debut less than three years ago, and we are thrilled that as of tonight he has a musical home for the rest of his career. Welcome, Luke!”

Music editor for Nashville.com. Jerry Holthouse is a content writer, songwriter and a graphic designer. He owns and runs Holthouse Creative, a full service creative agency. He is an avid outdoorsman and a lover of everything music. You can contact him at JerryHolthouse@Nashville.com
Previous Eli Young Band Celebrates Being Back At The Top
Next Americana Announces Final Round of Acts For Americanafest 2019