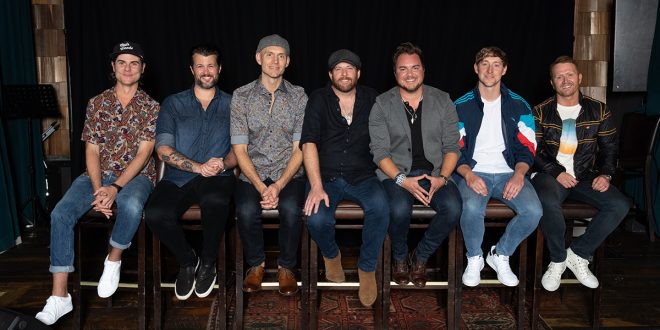 Eli Young Band Celebrates Being Back At The Top

Packing out the rustic saloon, friends, family, and key industry members joined songwriters Ross Copperman (BMI), Ashley Gorley (ASCAP), and Shane McAnally (GMR), to toast the chart-topping tune produced by Dann Huff – as featured on EYB’s latest project, This Is Eli Young Band: Greatest Hits (The Valory Music Co.). Guests were also offered an exclusive first look at This Is Eli Young Band, a not-yet-released mini-doc chronicling their journey since being founded as students at the University of North Texas in 2000.

Reflecting on their storied career and current smash success, EYB’s frontman Mike Eli shared onstage, “Something that we’ve been living by for a long time is, ‘Nothing comes easy.’ That’s just the truth – if it’s worth anything at all.” He continued, “At the end of the day, we wouldn’t be where we are now, we wouldn’t have what we have, and we wouldn’t be involved with the people that we’re involved with – I wouldn’t trade a day in our journey for overnight success.”

That same nose-to-the-grindstone mentality rings true in their introspective new single “ Break It In” via The Valory Music Co., as they explore lessons in life and love that are only learned over time well spent. Set to impact Country radio on July 29, watch the lyric video here.

Surpassing 2.8 billion career streams in total, EYB moves on this summer with a full list of tour stops. This fall, they’ll step up as direct support for Chris Young’s Raised On Country World Tour 2019.

Music editor for Nashville.com. Jerry Holthouse is a content writer, songwriter and a graphic designer. He owns and runs Holthouse Creative, a full service creative agency. He is an avid outdoorsman and a lover of everything music. You can contact him at JerryHolthouse@Nashville.com
Previous Musicians Hall of Fame & Museum Announces 2019 Inductees
Next Luke Combs Officially Inducted Into The Grand Ole Opry