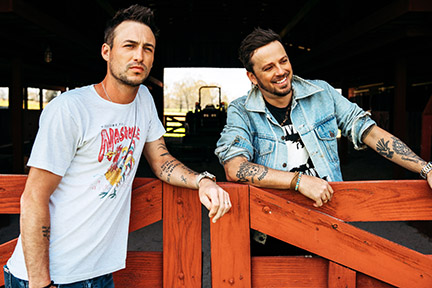 It’s been seven years since singers Eric Gunderson and Stephen Barker Liles, collectively known as country duo Love And Theft, released new music. Previously known for its contemporary-leaning songs, the duo is back with a fresh, harmony-driven approach on Better Off, a six-song EP the two wrote and produced themselves. Listen to Better Off, the title track and new single above.

“This is the most authentic music we’ve ever made,” Gunderson says. “We didn’t write with a specific sound in mind; we just wrote to have fun and be as creative as possible. This is probably the coolest music we’ve ever put out.” That’s a strong statement from the platinum-selling duo with six top 25 radio singles under its belt and more than a million followers on social media.

For Better Off, Gunderson and Liles pulled from their classic rock and gospel influences, leaning into the sounds of such legends as The Eagles, The Beatles, The Doobie Brothers, and The Gaither Vocal Band. They took risks experimenting with synthesizers and tremolos to create distinct, contemporary pop-rock and pop-country sounds.

The two co-wrote each of the six songs on the EP, a process that typically started with Gunderson building a track. After working together for 15 years, each is attuned to the other’s writing styles. Gunderson describes Liles’ method as “rapid-fire,” while he keeps his ideas in his head and shares them all at once. When they add a co-writer, they already know how their duo partner will react.

“We’ve switched up the entire way we approach making music,” Gunderson explains, “so we’re excited to have that control.” Liles agrees. “It’s what we want to say,” he affirms. “It’s even more personal because this is the first time we’ve ever owned our masters and our publishing.”

The EP’s title track was co-written with Jared Mullins (“Homemade,” Jake Owen) and Christopher Stevens (“Everything’s Gonna Be Alright,” David Lee Murphy/Kenny Chesney) and is the most country song in the collection. Bridging the gap between the sound Love and Theft is known for and where the duo’s music is headed, “Better Off,” is an acoustic guitar–driven country-pop tune with a sexy yet playful vibe.

“Accidentally on Purpose” is an ’80s-influenced, melodic pop song that showcases the higher end of Liles and Gunderson’s vocal registers, along with the airtight harmonies and synchronicity they’ve spent years developing. Billboardpraised the single, writing, “Duo Love and Theft returns with a new, harmony-driven track, having just inked a label deal with ONErpm. Stephen Barker Liles’s airy tenor rides atop an appealing, laid-back groove.”

Co-written with country artist Bree Doster, the song bebops through the confusion of opening your heart to someone, only to have them walk away. “It’s a fun vibe,” Liles says, and Gunderson adds, “It gets stuck in your head, like an ear worm kind of thing.”

Other songs on the EP include mid-tempo pop rockers “Anyway” and “Tell Me What It Feels Like,” the contemporary-styled “Mirror, Mirror” and “Downhill,” which features rap-style verses juxtaposed with an acoustic guitar turnaround.

Founded in 2006, Love and Theft spent their first five years as a trio, releasing top 10 single “Runaway” in 2009. After becoming a duo in 2011, Love and Theft released its second album, featuring recurrent No. 1 “Angel Eyes,” while a third album produced the critically acclaimed single “Whiskey on My Breath.”

Music editor for Nashville.com. Jerry Holthouse is a content writer, songwriter and a graphic designer. He owns and runs Holthouse Creative, a full service creative agency. He is an avid outdoorsman and a lover of everything music. You can contact him at JerryHolthouse@Nashville.com
Previous CMT’s “Next Women of Country” Showcases Coming To City Winery
Next Lauren Alaina Signs With Big Loud Records