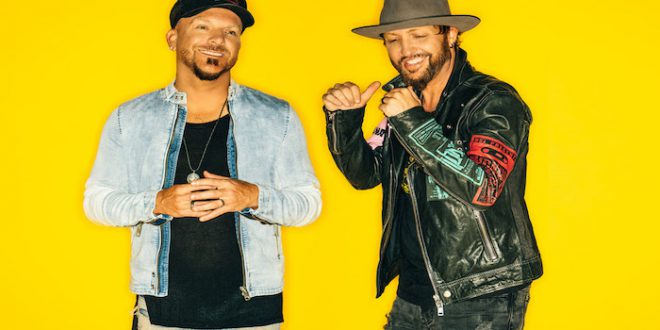 Reviver Records breakout duo LOCASH will deliver a game-changing performance this Friday (2/2) at the Pepsi Generations Live pop-up in Minneapolis, MN as part of Super Bowl LII celebrations. Following a blitz of critical acclaim for their pumped-up anthem “Don’t Get Better Than That,” the pair will take the stage for a private show following the trophy presentation of the 2017 Pepsi NFL Rookie of the Year.

The “spellbinding” (Taste Of Country) lead single from their forthcoming sophomore album landed in Country radio’s Top 5 most added songs of the week, kicking off with 42 stations already on board. Born from a place of positivity, “Don’t Get Better Than That” was co-penned by LOCASH’s Chris Lucas and Preston Brust (alongside Lindsay Rimes and Phil Barton) and follows three consecutive smash singles “I Love This Life,” “I Know Somebody” and “Ring on Every Finger.”

After scoring a trifecta of awards show nominations at the CMA, ACM and CMT Awards in 2017, the duo wrapped up a banner year by premiering “Don’t Get Better Than That” on NBC’s Megyn Kelly TODAY. Poised for MVP status in 2018, Lucas and Brust are set to follow their high-profile Super Bowl week performance with an appearance on the NFL Network’s comedic sports countdown show NFL Top 10. Airdates will be announced soon.

Widely recognized for their hustle and drive, LOCASH is slated for a jam-packed tour schedule in the year ahead. They will headline upcoming shows in Belvidere, IL (2/7) and Wabash, IN (2/8), before sharing the bill with Eli Young Band in Columbus, OH (2/9) with an exciting tour announcement coming soon.

Previous Stars Of CMT’s “Nashville” To Play at the Grand Ole Opry
Next Brett Eldredge Teams Up With Lyft And St. Jude To Fight Cancer