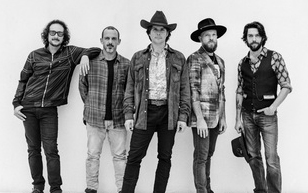 Lukas Nelson & Promise of the Real’s new song, “Throwin’ Away Your Love,” debuted last week. The track is the third unveiled from the band’s new album, A Few Stars Apart, which will be released Friday, June 11 on Fantasy Records.  Produced by Grammy Award winning producer Dave Cobb, the album was inspired by the stillness Nelson found while riding out the beginning of the pandemic with his family in Texas and was recorded live on eight-track tape over three weeks at Nashville’s historic RCA Studio A.
Across the album’s eleven new songs, including previously released tracks “Leave ‘Em Behind” and “Perennial Bloom (Back To You),” the band reveals what it means to come home again, to be still, and to find community—and yourself. Released to critical acclaim, Rolling Stone praises “Perennial Bloom,” asserting, “the track explodes into a euphoric prediction of better days on the horizon…a tight, radio-ready single,” while American Songwriter declares, “Lukas Nelson & Promise of the Real instill hope for a reconnected future.”
“I’m from what one might say is the ultimate road family—I’ve been on the road my entire life,” shares Nelson. “I’ve never been anywhere longer than three months, and suddenly here we are, the four of us together. And thank god we were together. I can’t remember the last time we had that much time together as a family. We had a lot of really important bonding that happened during that time. And I have to say, as terrible as the pandemic has been in so many ways, for my inner peace, I was able to take a lot of good from this time. I was able to pause and reflect.”
He continues, “It took me a really long time to come back to the home in my heart. In a physical sense, that’s Texas and Hawaii. But in a spiritual sense as well—I think I finally decided not to run from who I am and who I am destined to be. First and foremost, that’s a songwriter. That’s what this record means to me. There’s a story being told through the whole record. A story about connection and coming home.”

Music editor for Nashville.com. Jerry Holthouse is a content writer, songwriter and a graphic designer. He owns and runs Holthouse Creative, a full service creative agency. He is an avid outdoorsman and a lover of everything music. You can contact him at JerryHolthouse@Nashville.com
Previous Bluegrass Sensation Merle Monroe Release “Songs of a Simple Life”
Next CMT Award Winners