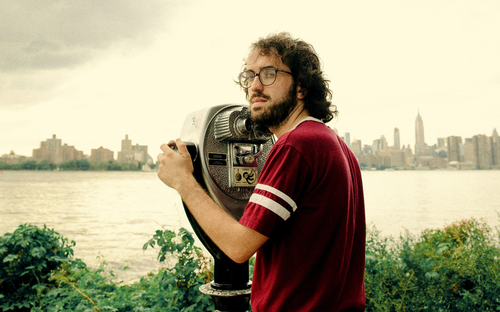 We discovered Anthony da Costa at his month long 5 Spot residency two years ago and man are we glad we did. He’s an amazing guitarist/singer/songwriter and he’s just released the title track to his upcoming album “Feet on the Dashboard,” due out later this Spring via AntiFragile Music. (Listen here) The single is the follow up to last year’s “Sooner Than Later,” that B-sides and Badlands called “heart-rending.”

“Feet on the Dashboard” tells the tale of young lovers getting by in the big city, with little else but each other. Though the story is personal one for Anthony, he also sees how the emotion can be universal. In his own words: “This song has been a feature of my live show for many years, and I’ve always wanted to find it a place on one of my records. It seems to connect with folks – that feeling of true, helpless love…the notion that you’d do anything for someone.”

Anthony da Costa is no stranger to the music world. At age 13 he started writing songs and playing out anywhere he could, and his career as a singer/songwriter never really stopped. In the last decade, he’s lived in New York City, Austin, TX and most recently, Nashville, TN, all of which have shaped him as a musician and led to many opportunities and collaborations.

da Costa has released many albums over the course of his career, most recently a solo LP (da Costa), a collaboration with Norah Jones guitarist Adam Levy (Neighbors) in 2017, and an EP (Shadow Love) in 2019. For the last several years, he’s also been consistently touring, sharing bills with bands such as Big Thief, The Milk Carton Kids and Loretta Lynn, and sharing stages with Joy Williams (The Civil Wars), Sarah Jarosz, Molly Tuttle, and Yola, just to name a few.

During his time as a sideman, da Costa’s desire to write and release songs of his own remained steady. Last year he met up with long-time friend and producer Kenneth Pattengale (The Milk Carton Kids), and made what will be his next solo record, Feet on the Dashboard, and in da Costa’s words, “it’s been a long time coming.” Engineered by Matt Ross-Spang (Jason Isbell, Margo Price, etc) and featuring personnel such as bassist Owen Biddle (The Roots), Feet on the Dashboard is a collection of songs set to be a deliberate reintroduction to who da Costa is, and who he has always been: an earnest songwriter and an artist on his own merit.

He’s got several dates coming up at Dee’s Country Cocktail Lounge so do yourself a favor and check him out.

Music editor for Nashville.com. Jerry Holthouse is a content writer, songwriter and a graphic designer. He owns and runs Holthouse Creative, a full service creative agency. He is an avid outdoorsman and a lover of everything music. You can contact him at JerryHolthouse@Nashville.com
Previous T.J. Martell Foundation Reveals Performers For 2020 Nashville Honors Gala
Next Tyler Farr Releases Jason Aldean Produced, “Only Truck In Town”