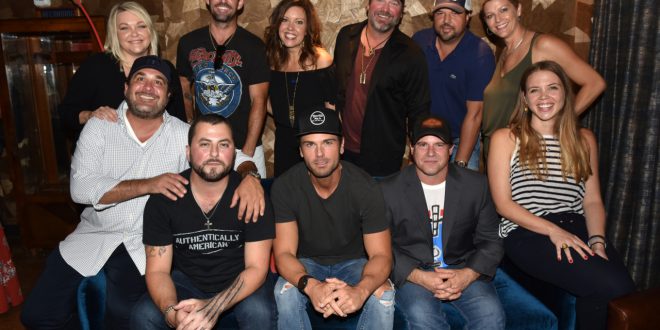 Last night Lee Brice hosted the first of a three-show series at Analog at Hutton Hotel. Rob Hatch, Jake Owen, Tyler Farr, Dallas Davidson and emcee Chuck Wicks sang several rounds of songs on acoustic guitars, telling stories that ranged from funny to heartfelt, in between. Ginger Gilbert Ravella, a Gold Star wife who lost her husband Troy in 2006, spoke on behalf of Folds of Honor, thanking Lee and everyone in the audience for their support.

The second and third shows in the series will take place Monday, August 27, as Lee honors Women of Country, and on Monday, October 1, when he and several friends pay tribute to Route 91 Festival’s one-year anniversary. SESAC serves as the official sponsor of the Analog Series, along with the venue itself, Analog At Hutton Hotel.

Further details on the remaining two shows are forthcoming and tickets are available here: https://www.eventbrite.com/e/lee-brice-presents-the-analog-series-tickets-47519820061

Music editor for Nashville.com. Jerry Holthouse is a content writer, songwriter and a graphic designer. He owns and runs Holthouse Creative, a full service creative agency. He is an avid outdoorsman and a lover of everything music. You can contact him at JerryHolthouse@Nashville.com
Previous Grand Ole Opry To Celebrate 93rd Birthday
Next Richard Thompson Set To Return With 13 Rivers