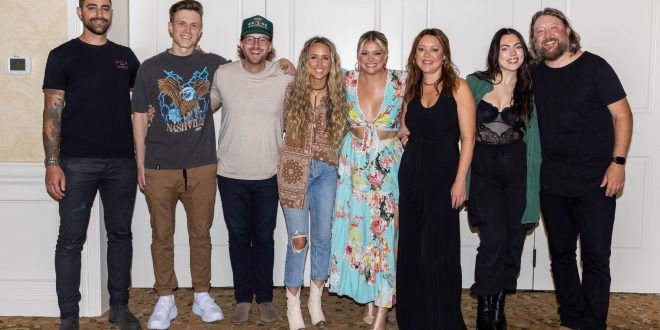 Lauren Alaina celebrated the release of her new album Sitting Pretty On Top of the World and invited the songwriters on the album to join her to perform. (L to R:) Paul DiGiovanni (album's producer and songwriter), Casey Brown, Jordan Reynolds, Parker Welling, Lauren, Hillary Lindsey, Emily Weisband, Cary Barlowe

Lauren Alaina celebrated the release of her No. 1 debuting album Sitting Pretty On Top of the World last night surrounded by her fellow songwriters on the album, friends, family, and her biggest industry supporters. The event was held outside at the Hillwood Country Club in Nashville, TN.

Lauren co-wrote 14 of the 15 songs on Sitting Pretty On Top of the World with some of the biggest songwriters in country music including Liz Rose, Lori McKenna, Hillary Lindsey, Emily Weisband, David Garcia, Ben Johnson, and more. Some of her co-writers on the album joined her last night to tell the stories behind the songs and perform the songs with her.

In addition to her new release, the ‘Fall of Lauren Alaina’ includes the Georgia native starred in a Hallmark Channel movie “Roadhouse Romance” that premiered to rave reviews last Saturday, September 11 and became the #1 most-watched entertainment cable program of the day and week among Total Viewers, Women 18+ and Households.

Music editor for Nashville.com. Jerry Holthouse is a content writer, songwriter and a graphic designer. He owns and runs Holthouse Creative, a full service creative agency. He is an avid outdoorsman and a lover of everything music. You can contact him at JerryHolthouse@Nashville.com
Previous AMERICANAFEST: New Additions Complete Lineup Of 200+ Acts
Next WATCH: Jenna Paulette’s “Pretty Ugly”