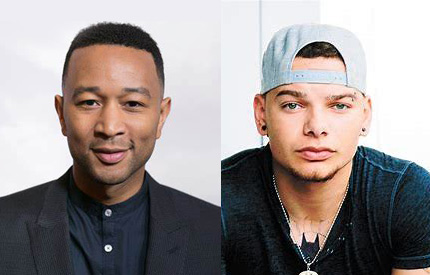 After months of hints from both artists, Kane Brown and John Legend today released “Last Time I Say Sorry,” the first official music collaboration between the two award-winning artists.  “Last Time I Say Sorry” was co-written by Brown, Legend, Matt McGinn and Andrew Goldstein. Produced by Goldstein. Listen to “Last Time I Say Sorry” HERE.
Brown and John Legend first connected backstage at “The Voice,” where Legend was a coach and Brown was a guest artist and performed his Platinum-certified No. 1 hit single “Homesick.” The two collaborated on “Trailer Talk,” Legend’s behind-the-scenes, online interview and performance series that takes place outside of his trailer at “The Voice.” “Last Time I Say Sorry” marks the latest song Legend has released this year, including the #1 “Conversations In The Dark” and most recently “Actions.” “Last Time I Say Sorry” follows Brown’s 5 consecutive #1 hits at Country radio, including his latest #1 single, “Homesick.”
Brown and Legend will make their national television performance debut of “Last Time I Say Sorry” on ACM PRESENTS: OUR COUNTRY, a special which will broadcast Sunday, April 5 (8:00-10:00 PM, ET/PT and 7:00 PM CT) on the CBS Television Network. Produced by dick clark productions, the two-hour special will feature intimate conversations and at-home acoustic performances of some of the biggest stars in country and other genres, along with clips of standout moments from the Academy of Country Music Awards’™ 55-year history.

Music editor for Nashville.com. Jerry Holthouse is a content writer, songwriter and a graphic designer. He owns and runs Holthouse Creative, a full service creative agency. He is an avid outdoorsman and a lover of everything music. You can contact him at JerryHolthouse@Nashville.com
Previous Thomas Rhett Releases The Inspirational “Be A Light”
Next Important CMA Fest Announcement