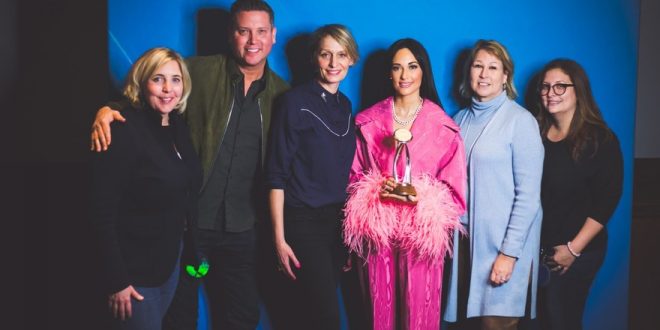 The Country Music Association awarded  Kacey Musgraves with the 2019 CMA International Artist Achievement Award last night, Feb. 27, surprising her backstage prior to her performance at Nashville’s historic Ryman Auditorium. The award recognizes outstanding achievement by a United States-based artist who has demonstrated the most significant creative growth, development and promotion of the Country Music industry outside of the United States during the eligibility period.

Since her first visit to the U.K. in 2012, Musgraves has developed an international touring base, headlining C2C: Country to Country festival in 2018 and becoming the first Country artist to perform at Fuji Rock Festival in Japan before launching her own international headline tour in Oslo last fall, which included a performance at London’s Wembley Arena. This marks the second time Musgraves has received the CMA International Artist Achievement Award, previously winning in 2016.

“Thank you so much to the CMA for honoring me with the International Artist Achievement Award. I absolutely love experiencing new cultures and playing overseas,” said Musgraves.

“Kacey has made touring internationally a huge priority throughout her career,” said  Sarah Trahern, CMA Chief Executive Officer. “We’ve witnessed the international fanbase for Country Music expand immensely and we applaud Kacey for her continued engagement to reach Country fans around the globe.”

The CMA International Awards honor industry executives and artists who have supported and made a difference towards the growth and promotion of Country Music in the international market place. Nominees are recognized in five categories acknowledging their dedication and efforts in growing opportunities for Country Music in their local territories.

Winners for the four remaining 2019 CMA International Awards categories will be presented with their awards in March as CMA hosts several events in international territories including Germany, The Netherlands, United Kingdom, Australia, New Zealand and Japan.

Music editor for Nashville.com. Jerry Holthouse is a content writer, songwriter and a graphic designer. He owns and runs Holthouse Creative, a full service creative agency. He is an avid outdoorsman and a lover of everything music. You can contact him at JerryHolthouse@Nashville.com
Previous New Townes Van Zandt Music Coming March 7
Next Phil Vassar Is Bringing “Hitsteria” to Nashville