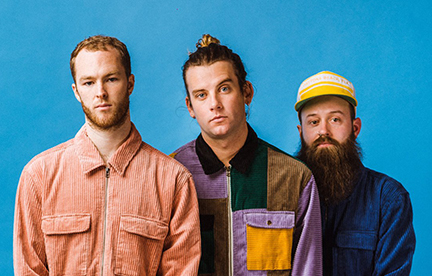 Judah & The Lion Back With Multi-Track Single

The two new tracks are the first new music since their sophomore LP Folk Hop N Roll (Cletus the Van Records/Caroline), which cemented Judah & the Lion as a festival favorite. Breakout single “Take It All Back” began 2017 with a three-week run at #1 on Alternative Radio and went Top 15 at Hot AC. The song was certified GOLD in both the US and Canada on the way to earning them an iHeartRadio Music Award for Best New Alternative Artist of the Year later that year. Follow-up singles “Suit and Jacket” (#4) and “Going to Mars” (#15) followed “Take It All Back” onto the Alternative Radio charts and the album has racked up over 200 Million streams and 300,000 sales to date.

Judah & the Lion (Judah Akers, Nate Zuercher, Brian MacDonald) toured the world on the strength of Folk Hop N Roll, performing almost 100 headlining shows and supporting acts like Twenty One Pilots, Jimmy Eat World, Incubus, and Kaleo, while impressing on main stages at Bonnaroo, Governor’s Ball, Forecastle, Bottlerock, Hangout Fest and more. They brought their energy to the small screen for performances on Jimmy Kimmel Live!, Good Morning America, The Late Late Show with James Corden, and CONAN. All of this earned the band a nod from Rolling Stone as an “Artist You Need to Know” and Billboard as their inaugural “Chartbreaker” artist as well as acclaim from NPR, USA Today, Teen Vogue, UPROXX, The Line of Best Fit, Garden & Gun and more.

Later this month, Judah & the Lion are set to take the stage at Nashville’s New Year’s Eve – Nashville’s annual celebration – alongside Keith Urban, Peter Frampton, Caitlyn Smith, and more at Bicentennial Capitol Mall State Park on December 31st. The band has also been announced as a part of Hangout Music Festival’s 2019 lineup with more festivals on the horizon.

Music editor for Nashville.com. Jerry Holthouse is a content writer, songwriter and a graphic designer. He owns and runs Holthouse Creative, a full service creative agency. He is an avid outdoorsman and a lover of everything music. You can contact him at JerryHolthouse@Nashville.com
Previous Alabama Announces “50th Anniversary Tour”
Next Tracy Lawrence, Steady In Music And Philanthropy