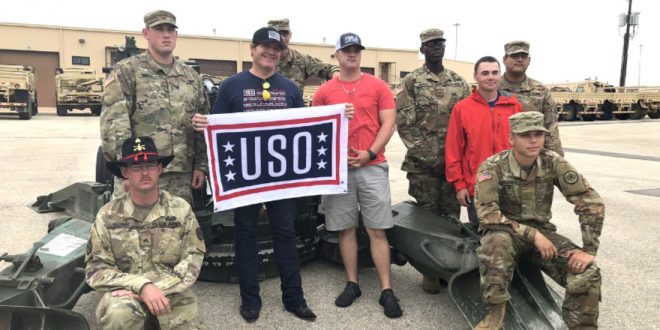 Attended by Fort Hood Soldiers and their families, Niemann deployed his entire arsenal of hits – including platinum-certified smashes “Lover, Lover” and “Drink to That All Night” – plus his patriotic new anthem “Old Glory,” which the singer describes as “100 percent heart, zero percent politics.” It was a fitting tribute to a group of soldiers who have been serving their country with impeccable honor since World War I.

On his first USO tour in 2016, Niemann established a deep connection with the military, learning firsthand from service members about the important moments they were sacrificing to serve their country – things like dance recitals and birthdays, anniversaries and more. Then after hearing news of the Tongo Tongo ambush in Niger – which took place almost exactly one year ago today on October 4, 2017 – Niemann was inspired to write the resolute “Old Glory,” about the American flag, performing the song during that year’s USO Holiday Tour where he joined Chairman of the Joint Chiefs of Staff General Joe Dunford as they visited service members in Iraq, Afghanistan, Spain and Poland.

A day before the Fort Hood concert, Niemann also helped launch USO Fort Hood’s new Connect And Create program, a first-of-its-kind initiative at the base designed to connect parents and children as they learn, create and experience music. Niemann jammed with the military families in attendance, shared stories and donated guitars to the USO program, courtesy of his FREE THE MUSIC USA non-profit organization.

“It’s no secret that I have an infinite affinity for the brave men and women of our military,” shared Niemann. “I’m so honored to visit Fort Hood and play a concert saluting this milestone U.S. Army III Corps’ anniversary. Having the opportunity to support our heroes by teaming up with the unbelievable folks at the USO has changed my life. To help launch their Connect And Create program and give back by donating guitars means the world. God Bless Old Glory!”

“Recognizing the unique challenges faced by military children, Connect And Create fosters the belief that music is a universal language kids can take with them no matter where they are in the world,” said Isabel Hubbard, USO Fort Hood Center Director.

Music editor for Nashville.com. Jerry Holthouse is a content writer, songwriter and a graphic designer. He owns and runs Holthouse Creative, a full service creative agency. He is an avid outdoorsman and a lover of everything music. You can contact him at JerryHolthouse@Nashville.com
Previous 29th Annual International Bluegrass Music Award Winners
Next Mitchell Tenpenny Celebrates His First Gold Single