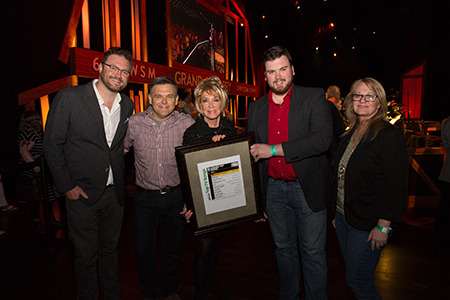 Jeannie Seely Recognized At Opry For Song Written In 1964

50 year Grand Ole Opry veteran Jeannie Seely is a Grammy winner, country hitmaker and award-winning songwriter. During her hosting segment on the Grand Ole Opry Friday night, she was presented with an award recognizing her song “Anyone Who Knows What Love Is (Will Understand)” for reaching No. 2 on the Billboard Top TV Songs Chart in January of this year.

Written in 1964 by Seely with Judith Arbuckle, Pat Sheeran and Randy Newman and originally a pop and R&B hit for Irma Thomas, the song has seen much renewed popularity. It has been used in several TV shows including “Big Little Lies,” “Orphan Black,” “NFL GameDay Morning,” “Here And Now” (on HBO),  and multiple episodes of “Black Mirror,” it has been used in movie trailers for “Moonlight” and “Jurassic World: Fallen Kingdom,” and it has been recorded by artists like Seal, Boyz II Men, Jessica Brown-Findlay, Samantha Whates – and Jeannie Seely herself (for her latest CD Written In Song).

“It is absolutely amazing to me the way this song just keeps showing up in different genres and uses. One of the reasons, I believe, is the haunting melody, and the other is the vulnerability of the lyrics,” said Jeannie Seely. “Whatever the reason, I’m sure glad that it does, and I’m very grateful to all who have recorded it.”

Music editor for Nashville.com. Jerry Holthouse is a content writer, songwriter and a graphic designer. He owns and runs Holthouse Creative, a full service creative agency. He is an avid outdoorsman and a lover of everything music. You can contact him at JerryHolthouse@Nashville.com
Previous Maren Morris To Perform In Bluebird Documentary
Next Pilgrimage Adds Dave Matthews & Tim Reynolds To Lineup