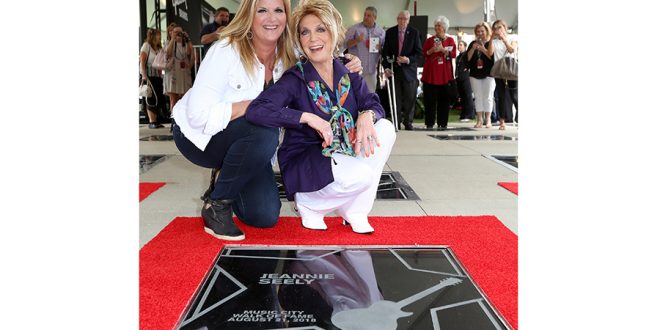 Country music royalty and a fifty-one year member of the Grand Ole Opry, Jeannie Seely, was recognized for her contributions to the music industry by the Nashville Convention & Visitors Corp with star number 82 on The Music City Walk of Fame during an induction ceremony on Aug. 21, 2018 at 11:30 a.m. in Music City Walk of Fame Park. Fellow Grand Ole Opry member, Trisha Yearwood presented Jeannie Seely with the special honor in front of invited friends, family, industry members and fans. In addition to Ms. Seely, Brenda Lee, Ray Stevens and Ben Folds were also inducted into the Walk of Fame.

Inductees are recognized for their significant contributions to preserving the musical heritage of Nashville and for contributing to the world through song or other industry collaboration.

“I’m honored to be a part of celebrating Jeannie Seely at the induction ceremony putting her star on the Music City Walk of Fame,” said Trisha Yearwood. “Jeannie continues to do so much for our industry, and I’m proud to call her my friend.”

“I am humbled by this recognition, and to know I have a place in history among my peers is truly astounding!  Hopefully those who are following our shared dreams will be inspired and encouraged by this walkway,” Said Jeannie Seely. ”Last year I saw the incredible respect given to those represented here. I can only hope that I have earned, and will continue to deserve that respect.”

Jeannie Seely’s recordings have spanned six decades and she continues to entertain at full speed today. Seely is a host on SiriusXM, “Willie’s Roadhouse,” where she shares personal memories and fun stories about the songs she spins. In January of this year she was recognized for ranking #2 in Billboard’s Top TV Songs Chart for January 2018 for her song “Anyone Who Knows What Love Is (Will Understand),” written in 1964 and recorded by Irma Thomas. The song is the trailer theme song for new “Jurassic World: Fallen Kingdom,” many acclaimed music artists recorded their own versions, including Seal and Boyz II Men and it has been featured in numerous episodes of the science fiction anthology Netflix television series “Black Mirror.”

She is a prolific songwriter who recently released “Written In Song,” a CD project with 14 tracks all co-written or self-penned by Seely. Many of the songs were recorded by Hall of Fame members. Jeannie earned a Grammy for her recording of “Don’t Touch Me” in 1967. A country music legend and trailblazer, Seely is recognized for her diligence in becoming the first female to regularly host segments of the weekly Opry shows and is credited for changing the image of Opry by being the first to wear a mini-skirt on the Opry stage. Known for her quick wit and humor, she documented them in her book, Pieces Of A Puzzled Mind, which is a unique collection of witticisms. Jeannie Seely has also starred in several major stage productions.

Music editor for Nashville.com. Jerry Holthouse is a content writer, songwriter and a graphic designer. He owns and runs Holthouse Creative, a full service creative agency. He is an avid outdoorsman and a lover of everything music. You can contact him at JerryHolthouse@Nashville.com
Previous David Corlew Named Honorary Member Of The 187th Airborne Infantry Regiment
Next 52nd Annual CMA Awards Nominations Announced