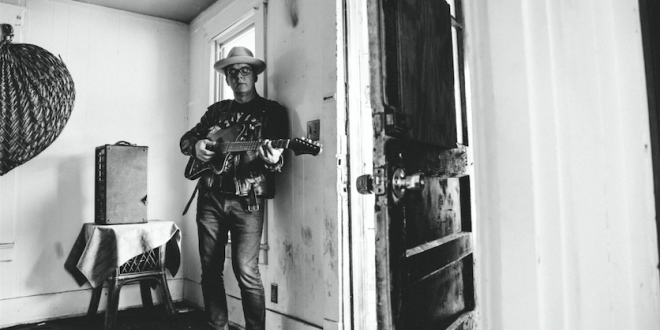 Interview with Derek Hoke on New Album “Bring the Flood,” the 5 Spot, and Favorite Holiday Dish

So this is your fourth album – when did you get your start writing music? And how long did it take for you to develop your sound?

I started writing music at a young age. Maybe 14 or 15, I can’t really remember. It took me a long time to find my own sound. I grew up playing cover songs in loud bars where you threw in a few of your own tunes during a set. Not really the best environment to self-analyze your own music. I was Johnny Jukebox, if you will. It took me moving to Nashville to really hunker down and find out what I was good at doing.

Your album, Bring the Flood is a rather gloomy but old-time rock’n’roll sound/feel to it, which is personally something I really enjoy. Is there a certain message that you are trying to tell your listeners through these songs on the album?

Hopefully, I’m conveying what some people are feeling right now. I wrote most of the record in last December and January. Post-election. A lot of folks were wary of an uncertain future for America. I was, and still am one of them. There are a few bright spots, too. A light in the darkness.

Who are some of your influences that got you to this point in your music career?

First and foremost, The Beatles. Even down to how an album is sequenced. I always think of that stuff when I start writing. You need to have a little variety to the tunes. I also lean on the simple melodies of Willie Nelson. Especially the early stuff. The tunes are instantly memorable.

Tell us a little about your $2 Tuesdays at the 5 Spot.

It’s a weekly show featuring up and coming acts, as well as seasoned vets. Some are local, some touring groups, it’s different every week with all types of music. The local brewery, Yazoo, supplies the beer. $2 cover/$2 Yazoo pints, not a bad deal.

Do you plan on getting out on the road with this album you released?

I’ve gotten the ball rolling for 2018. I’m usually the opening act for a more established artist. This time I’m trying to venture out my own.

What is the holiday dish that you look forward to the most with Thanksgiving and Christmas season rolls around?

Green bean casserole. Is that a holiday dish? I just remember my late Grandma Peggy would make it every year. It was super thin. About as thin as a slice of bread. I’m still trying to get it right.

What is the food/meal you just can’t say no too?

When you’re out on the road is there a favorite stop you have?

Not really. I usually try to get to venues early and go exploring. Try to find the “cool” coffee shop and the hip record store. Eat where the locals eat.

Where in Nashville is your favorite place to get:

What’s your special dish? What can you cook better than anyone?

If you like burnt green bean casserole, then I’m your man.

Name three things you are most thankful for this year

My health, my friends, and my family.

Dark times call for dark songs. At least that’s how East Nashville based singer/songwriter Derek Hoke sees it. On his new album, the portentously titled Bring the Flood (Little Hollywood), Hoke dives into a sound far more ominous, threatening, and anxiously introspective than the music on his previous three full length releases would suggest.

“So much pain and sorrow/more than I’ve ever seen,” sings Hoke on the opening “Love Don’t Live Around Here,” an exploration of life passing by for people stuck in their small town existence. And for most of the next 40 minutes, he explores various shades of unease, if not quite gloom, of the characters that populate this world with the confidence and musical prowess gleaned through years of working in Nashville, one of the toughest, most competitive songwriting scenes in the nation, if not the world.

Assisted by contributions from friends and neighbors such as Elizabeth Cook, Langhorne Slim, Aaron Lee Tasjan, and Luther Dickinson, then molded into a cohesive whole by longtime producer and friend from childhood Dex Green, Bring the Flood finds Hoke more visceral, honest and intuitive than at any other point in his career.

Never one to release the same record twice, this album nevertheless marks a substantial shift in Hoke’s approach away from the rootsy, singer/songwriter vein and towards a more edgy, low boil, subtle country infused rock oriented style. It was inspired by Hoke watching the news, often with the audio turned off, in the heated political atmosphere of late 2016.

“It seemed like a dark cloud coming over America, watching a lot of people hurting, going through hard times, harder than ever.” He lodged those visual images into musical protagonists, flowing melodies and, with Green’s assistance, an overall conceptual world where each track feels connected to the last. That creates an austere, rugged but not stripped down landscape, both hypnotic and earthy in its atmosphere.

Hoke looks to artists like Tom T. Hall and Roger Miller, known for their directness and simplicity, for inspiration. “I’m a big fan of getting to the point and saying what you mean” he explains, and that informs tracks like the blues based ballad “I’m Just a Man” with its swampy, humid texture and “She Never Loved Me” featuring wiry, sinewy funk pushing nervy, dreamy/nightmarish strings.

You wouldn’t suspect it from his smooth vocals and unruffled demeanor, but Hoke’s current persona emerged from a self-professed “skateboard-punk rock kid” upbringing in Florence, South Carolina. His grandfather was a Grand Old Opry/Hee-Haw enthusiast and his father a Stones loving classic rock devotee. Hoke’s own “weird” CD collection extrapolated from those influences and added his own. So Radiohead and the Pixies sat alongside Clint Black and Garth Brooks. “It wasn’t to be cool. All of this is good music, it all has a place and it all speaks to me.”

That diverse sense of musical inclusion began when he was a child, mimicking songs and riffs from TV and radio. It was kick-started after Hoke moved to Nashville in the late nineties, taking a job selling merchandise for Ricky Skaggs. For the next three years, Hoke visited every state, learning the finer points of performing from an established veteran. His role as founder/curator/weekly host of $2 Tuesdays at Nashville’s The 5 Spot club keeps him plugged into fresh talent, absorbing different methods of songwriting and execution.

The themes of isolation on Bring the Flood were in part stirred by Hoke driving alone late at night, singing thoughts into his phone recorder and analyzing the results in the daylight with producer Green. “It’s a lonely feeling, especially on the back roads and two lanes around middle Tennessee. I wanted to evoke that mood running through these tunes.”

He also sees these tracks connecting with a more visual, almost cinematic coherence. “We tried to make these tunes wider-sounding. This is something I’ve never done before. I’ve always kept it short and sweet…this is fuller,” he says. Hoke also stretched his comfort zone, urged by Green who encouraged him to push the creative envelope and, should he revert to his more traditional impulses, drove him to “get back in the fire.”

The result on insightful, dreamy, psychedelically tinged tracks like “When the Darkness Comes” reflects that heat and the simmering frustration developed by the uncertainty of current times.

As a whole, Bring the Flood focuses on Hoke’s knack for melody and easy flowing, distinctive vocals, incorporating them into a cohesive, sometimes unsettling yet always imaginative and creative set that positions him firmly in the top tier of contemporary songwriters. It’s a bold, perhaps unexpected stride in a dynamic new direction, further separating him from his Nashville peers, and audacious proof that Derek Hokehas stepped forward with confidence and is not looking back.

Look for Hoke to further expand as he takes Bring the Flood on the road in 2017 and beyond, exposing audiences to its nocturnally inspired nature and spellbinding musical charms.