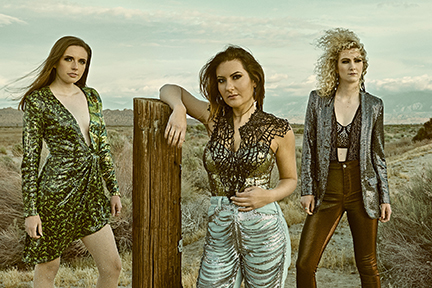 Cali-Country trio, Honey County released their new song “Under Your Influence” with Nashville-based riser, Spencer Crandall. The new single, along with their 2018 release “Love Someone” will be featured in the Paramount Network series “Yellowstone” starring Kevin Costner this evening. “Under Your Influence” was penned by the band’s Dani Rose along with JP Williams and Maks Gabriel.

“We’ve been longtime fans of music supervisor Andrea von Foerster (500 Days of Summer) and the creator of ‘Yellowstone,’ Taylor Sheridan (Hell or High Water). When Andrea first told us about a new show she was working on starring Kevin Costner as a ranch owner, and that we might be a good fit musically, I played it cool but I was freaking out inside,” commented Dani Rose. “We’re so grateful to Andrea and Taylor for giving us a platform on a hit show that educates viewers not only on conserving the natural beauty of our national parks but also exposes them to new music interwoven creatively within a twisted plot. We can’t wait to watch the rest of Season 2 and the hopeful demise of the Beck Brothers.”

“I’m so excited about this new single! It’s very rewarding to have a song featured on a huge show like ‘Yellowstone,’” said Spencer Crandall, “I loved getting to work with Honey County and I can’t wait to hear what the fans think of ‘Under Your Influence’!”

Music editor for Nashville.com. Jerry Holthouse is a content writer, songwriter and a graphic designer. He owns and runs Holthouse Creative, a full service creative agency. He is an avid outdoorsman and a lover of everything music. You can contact him at JerryHolthouse@Nashville.com
Previous Watch: Noah Cyrus, “Live or Die”
Next Alabama Postpones “50th Anniversary Tour” Due to Randy Owen’s Health