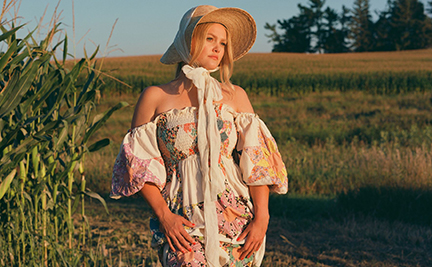 Hailey Whitters made her debut at country radio this week. The Iowa-born, Nashville-based rising country star released her breakout single “Everything She Ain’t,” which was just named one of Rolling Stone’s “Best Songs of 2022 So Far,” debuted as the 5th most-added song on 32 stations on the country radio charts (watch above).

“I’ve dreamt about being on country radio since I was a little girl growing up in the middle of nowhere Iowa,” Whitters reflects on this career milestone. “This year marks 15 years in a ‘ten year town’ for me and I’m feelin’ very lucky to get to see this dream become a reality.”

“Everything She Ain’t” is the first single from Whitters’ third studio album RAISED that was released earlier this year. Bryan Simpson and Ryan Tyndell are co-writers on the track..

Following her debut headline tour and performances at Tortuga Music Festival and Stagecoach earlier this year, Whitters will hit the road this summer with Jon Pardi and Lainey Wilson on his Ain’t Always The Cowboy Tour. Find a full list of tour dates below or visit HaileyWhitters.com.

Music editor for Nashville.com. Jerry Holthouse is a content writer, songwriter and a graphic designer. He owns and runs Holthouse Creative, a full service creative agency. He is an avid outdoorsman and a lover of everything music. You can contact him at JerryHolthouse@Nashville.com
Previous Caverns Amphitheater Celebrates Grand Opening
Next Nashville Songwriters Hall of Fame Announces 2022 Nominees