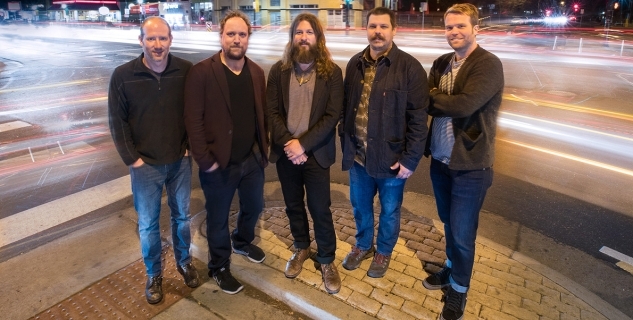 Greensky Bluegrass is hitting the road in support of the its 7th studio album All For Money, out January 18th. Following a successful four night residency at Chicago’s Riviera Theatre at the end of last year, the band kicks off its 2019 winter tour tonight in Albany ready to start the New Year with a bang. Greensky Bluegrass is set for multiple dates with special guests Circles Around The Sun, Billy Strings and the Cris Jacobs Band joining them.

The tour will include stops at famed venues across the country including the Ryman Auditorium, The Beacon Theatre, two nights at The Anthem in DC and more.

Never ones to slow down, following this tour Greensky Bluegrass is scheduled to perform at a variety of summer festivals as well as a three night engagement at the Red Rocks Amphitheatre on September 13th, 14th, and 15th – with acts The Lil Smokies, Rayland Baxter, and Billy Strings opening each night respectively. Tickets for all 2019 dates are available now; CLICK HERE for tickets.

All For Money will be released via the band’s own label, Big Blue Zoo Records. The set of 12 new songs was recorded at Echo Mountain Recording in Asheville, NC alongside co-producers Dominic John Davis (Jack White’s longtime bassist) and Glenn Brown. After 18 years together, up to 175 shows per year, nearly 1,000 different setlists, six studio albums and a litany of live releases, Greensky Bluegrass embodies more than just music for its members, and the irony of the album title highlights the band’s own sense of humor. The collection is being hailed by critics as their best yet.

Music editor for Nashville.com. Jerry Holthouse is a content writer, songwriter and a graphic designer. He owns and runs Holthouse Creative, a full service creative agency. He is an avid outdoorsman and a lover of everything music. You can contact him at JerryHolthouse@Nashville.com
Previous Tim McGraw Releases Lyric Video For “Thought About You”
Next Dave Matthews Added To Willie Nelson Tribute