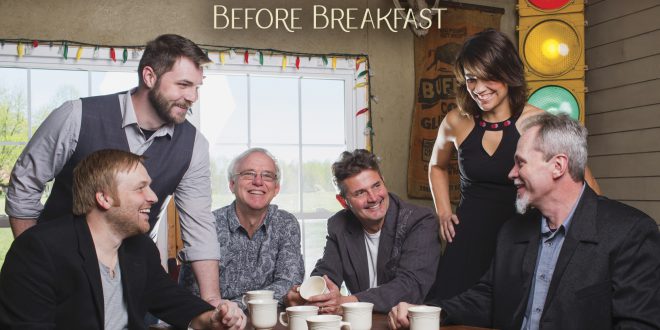 The Grascals' BEFORE BREAKFAST A Fresh Brew Of Bluegrass Perfection - Due Out Sept. 1

The Grascals’ BEFORE BREAKFAST A Fresh Brew Of Bluegrass Perfection – Due Out Sept. 1

The Grascals’ newest album, BEFORE BREAKFAST, offers fans a hot shot of diversity with a freshly brewed mix of Bluegrass perfection.  The 12-song collection will be available September 1.  Fans who pre-order HERE now will receive”Sleepin’ With The Reaper” as a “grat track.”

BEFORE BREAKFAST finds the award-winning group at a career high point vocally and musically, and the record’s energy is palpable.  A more relaxed pre-production approach led to “easy” song choices.  The band chases demons, finds salvation and dances their way through what will surely become essential listening for lovers of the Bluegrass art form.

This is the second album for this configuration of The Grascals.  The current group features founders Terry Eldredge (lead vocals, guitar), Terry Smith (lead vocals, bass) and Danny Roberts (mandolin), plus longtime banjo ace Kristin Scott Benson, fiddler Adam Haynes and John Bryan (lead vocals/guitar).  As Smith notes, the group continues to evolve organically.  “We’re even breathing together vocally,” he explains.   “The Osborne Brothers always said that when you get to that point, it was right – and they were on to something.”  This cohesiveness allows the band to navigate the diverse material, which ranges from traditional to contemporary Bluegrass, and includes Inspirational tunes as well.

The album kicks off with “Sleepin’ With The Reaper,” which Benson calls “a departure for the group but a good fit nonetheless.”  John Bryan’s haunting vocal brings a sense of menace and urgency to the song, which sets the stage for the next dynamic track.  Vocalist Terry Eldredge believes the best songs are about life and truth, and that lyrically, there is nothing but the truth in “Demons.”  El’s vocal versatility is obvious on “Clear Corn Liquor,” a steamin’ hot, fiddle-filled ode that he delivers with sass.  “Delia features John on a band first,” says Danny Roberts.  “His clawhammer banjo is unique for us and gives a great old-timey sound to the song.”  Terry Smith is in fine form on the melancholy, universally-themed ballad”Lonesome,” which he co-wrote with his brother Billy.  John brings glorious gratitude to the Gospel jewel, “I’ve Been Redeemed.”

About The Grascals
Timely yet timeless, The Grascals make music that is entirely relevant to the here and now, while acknowledging the traditional values that birthed the genre.  Their cutting-edge modern Bluegrass is delivered with a deep knowledge of, and admiration for, the work of the music’s founding fathers.  It’s a unique sound that has earned the group three Grammy® nominations and two Entertainer of the Year awards from the International Bluegrass Music Association, as well as national media attention that seems to perpetually elude other acts entrenched in niche genres.  High-profile appearances include The Tonight Show with Jay Leno, Fox & Friends,The Late Late Show with Craig Ferguson, and CBS’ The Talk.  The bastions of Country and Bluegrass continue to welcome them, as evidenced by 150-plus performances on the Grand Ole Opry.  Additional honors include President Barack Obama’s Inaugural Ball at the Smithsonian and two performances for President George W. Bush.