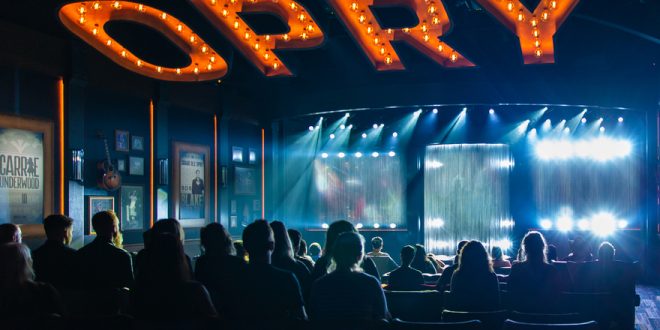 The Grand Ole Opry today unveiled its new daytime backstage tour, including a new immersive film in a custom-built theater, The Circle Room. Hosted by Opry members Garth Brooks and Trisha Yearwood, the film experience takes fans on an emotional, heartfelt journey through the eyes of the artists who play the world-famous stage and features priceless archival footage of over 100 artists, country’s most iconic songs, and concert-like special effects.

Throughout the film, Brooks and Yearwood stand in the Opry’s famous circle which moved with the Opry from the historic Ryman Auditorium to the Opry House more than 40 years ago and reflect on their first memories of the Opry, their Opry debuts, member invitations and inductions, and lives as members of the Opry family. Additionally, they share some of the Opry’s most powerful moments and lead a chorus of dozens of past and present Opry artists—Roy Acuff, Trace Adkins, Patsy Cline, Vince Gill, Dolly Parton, Minnie Pearl, Darius Rucker, Blake Shelton, Carrie Underwood, Keith Urban among them—in the Opry’s anthemic “Will The Circle Be Unbroken.”

“For nearly 100 years, the Grand Ole Opry has offered fans a unique way to discover and connect with country music’s new stars, superstars and legends,” said Colin Reed, chairman and chief executive officer for Ryman Hospitality Properties. “ As visitation to Nashville and the Opry has continued to rise in recent years, we have seen unprecedented demand from guests for more ways to connect with artists through the Opry and its amazing story. This magnificent film is designed to immerse fans in the Opry experience from an artist-centered point of view to give them a glimpse into why playing the Opry has been described by so many as the pinnacle of their careers.”

The Circle Room is the capstone of a $12 million Opry House expansion and renovation project aimed at enhancing the Opry guest experience. In addition to the new VIP room and film, the renovation also included a new retail store, enhanced food and beverage options, a new parking area, and additional Plaza upgrades, which were completed in late 2018.

The new film leads off the Opry’s new backstage tour, which continues into the newly renovated Opry House lobby featuring a new, custom lighting element made with Gibson guitars and a video presentation showcasing what happens backstage in the moments before the Opry’s red curtain goes up on the iconic show.

Backstage, guests learn more about the Opry’s story from Opry member Brad Paisley in historic Studio A, visit the Opry’s themed dressing rooms, and more before ending with the greatest thrill in country music: a chance to stand in the sacred circle on the Opry stage.

By night, the new Circle Room becomes a VIP upgrade area for Opry show guests, featuring food and beverage as well as a visit from an artist on the evening’s show.

The new Opry Circle Room and Lobby experiences were conceived, designed, and produced by the award-winning experience design and production agency BRC Imagination Arts , who have worked with acclaimed destinations including Ryman Auditorium, Jameson Distillery Bow St., the Rock and Roll Hall of Fame, Museum of Liverpool, The Henry Ford, Guinness Storehouse, and more.

Need a hotel while in Nashville?
GUARANTEED Lowest Rates for Nashville Hotels!

Music editor for Nashville.com. Jerry Holthouse is a content writer, songwriter and a graphic designer. He owns and runs Holthouse Creative, a full service creative agency. He is an avid outdoorsman and a lover of everything music. You can contact him at JerryHolthouse@Nashville.com
Previous Loretta Lynn Visits Ray Stevens’ CabaRay
Next MTSU To Open Chris Young Café