Four-time Entertainer of the Year and Superstar Luke Bryan is planning a FREE Nashville concert in the heart of downtown on Monday, Sept. 10 as the grand opening celebration of his new multi-level venue, LUKE’S 32 BRIDGE FOOD + DRINK. Luke’s performance will take place just outside the bar at 301 Broadway. Party begins at 6:30pm. Special guests include Jon Langston, Chelsea Field and DJ Rock
“I’ve been looking forward to this for some time,” shared Luke. “Couldn’t think of a better way to kick this place off than to have a big party right on the streets of Broadway!”
Last summer, Luke performed in downtown Nashville as part of the 2017 Stanley Cup Final Game 6 drawing 60,000 fans. 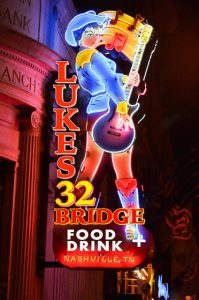 Music editor for Nashville.com. Jerry Holthouse is a content writer, songwriter and a graphic designer. He owns and runs Holthouse Creative, a full service creative agency. He is an avid outdoorsman and a lover of everything music. You can contact him at JerryHolthouse@Nashville.com
Previous Morgan Evans “Things That We Drink To” To Release October 12
Next Thomas Rhett Scores 11th career No. One